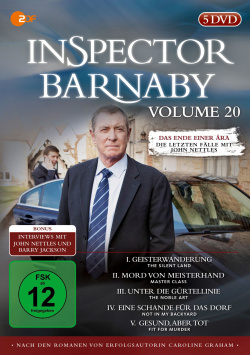 Content: Time to say goodbye! After 14 years and a total of 81 episodes, DCI Tom Barnaby alias John Nettles is now going into well-deserved retirement. Even if the series continues with Neil Dudgeon as Barnaby's cousin John, this farewell is a very decisive and wistful turning point for fans. But this is now on the twentieth DVD box of the series with five new episodes a little sweetened. At the side of his loyal colleague DC Ben Jones (Jason Hughes) Tom Barnaby can show once again what has made the series so popular with the viewers.

Again it's about murder, intrigues and secrets in the county of Midsomer. Anyone hoping for major changes after 14 years will certainly be disappointed. These five episodes from the 13th season also make use of the proven mixture of suspense, British humour and bizarre characters. Admittedly, the last episode with John Nettles may have been a little too ordinary. For the farewell of this cult figure one would have wished for something special. And yet: when Tom Barnaby delivers his farewell speech and hands over the helm to his cousin, then a little goose bump cannot be avoided.

There is no question that not only the scripts, but also John Nettles were decisively involved in the long lasting success of the series. But after all these years, a bit of fresh air from the series will certainly do you good. DC Ben Jones has also become such a strong and popular character that his presence will suffice to make fans feel at home in their Midsomer even during the phase in which they have to get used to Neil Dudgeon.

The twentieth DVD is absolutely recommendable for fans not only because of the once again very entertaining cases peppered with many little absurdities. The box also marks a small but striking turning point in the history of this successful series, which at least in England continues to be written successfully with John Barnaby. So say goodbye to Tom Barnaby and his wife Joyce and look forward to many more exciting and amusing stories from Midsomer. Because murder knows no retirement!

And that's what the last episodes with John Nettles are about:

Joyce Barnaby is quite sure that she hit a person in the dark at night. Was it Gerald Ebbs? The director of the local library is found dead in the cemetery the next morning. Gerald was obsessed with the cemetery where many patients of the mental hospital closed 100 years ago lie. Gerald had often bought flowers for the grave of Caroline Roberts from the florist Adam Peach. The depressed young woman had thrown herself to death in the stairwell of the clinic in 1870. The ruins of the clinic come just in time for the busy charlatan Jeff Bowmaker's "ghost wanderings", on which he entertains sensationalist villagers with horror stories for a fee every night. He owes some tips to the beautiful local historian Faith Kent, one of his lovers. She warns him of her jealous husband Ian on the evening of a ghost tour through the ruins, in which Joyce also takes part. Drunk, he beat Faith and threatened to kill Jeff. But it's someone else who gets murdered in the witching hour. And Barnaby finally gets a clue as to who's murdering Magna in March and why. . . (Text: ZDF)

Star pianist Sir Michael Fielding is enthusiastic about an exceptional talent in his class, the young Zoe Stock. His daughters Miriam and Constance, who run his elite school, spoil Zoe. But they can't protect her from being seduced and betrayed by her classmate Orlando Guest. Guest is finally found hanged in the forest. Another experience turns out to be a hallucination: Zoe sees a young woman drowning with her newborn in the nearby river, but Barnaby finds no body. Zoe's alarmed parents rent a room in the village pub. Inexplicably, their car's brakes fail and they are fatally injured. A photo in the village pub finally puts Barnaby on the trail of a young mother, the crazy Molly. She drowned in the river 20 years ago. But how does Zoe know about this? Neither Sir Michael nor his daughters nor Reverend Gregory, who found the drowned woman at the time, allegedly remember details. The Reverend is murdered praying in his church. Everything points to a secret about the birth of Zoe. (Text: ZDF)

DVD 3: Below the belt

The Midsomer Morchard mansion is celebrating. A son of the village, John Kinsella, has just become middleweight boxing world champion in New York. The Barnabys are personally invited by mansion owner Gerald Farquaharson. Tom is a witness when Gerald misses two brass knuckles from his collection. Tom also wonders about a tender phone call from Grace Bishop - allegedly with her husband Frank, Johns promoter - but actually with her lover Teddy Molloy. Joyce discovers that Iris, the fiancée of Gerald's uncharming son Sebastian, is pregnant and unhappy and very much in love with her boss, the lawyer Giles Braithwaite. Tom and Joyce can sense how many old enmities are smouldering between those present. The conflicts break out openly when the sports fool Gerald has a historical boxing match from 1860 staged in which a son of Midsomer also defeated an American. The performers are John and Ken Tuohy. Ken, furious with jealousy over his fiancée Libby's affair with John, so brutally attacks John that the fight is broken off. Worse still: Lawyer Giles Braithwaite and promoter Frank Bishop are found dead shortly after each other, both with traces of a knuckleduster on their skulls. (Text: ZDF)

DVD 4: A disgrace for the village

The heavily wealthy Norman Swanscombe wants to be elected mayor and build a new district with business and social housing. His celebration in his ultra-modern villa is severely disrupted by Maureen Stubbs. Swanscombe really wants to spoil the idyll with a cheap department store with thousands of parking spaces. At night, Maureen is stabbed to death with a broken bottle. David Walsh, Swanscombe's opponent, believes Maureen had evidence of a conspiracy by Swanscombe, town planner Liz Gerrard, architect Clifford Bunting and contractor Geoff Rogers. But when Bunting's neck is broken in the electric patio door in the Swanscombe villa and Rogers is poisoned in his convertible and poured into concrete, Barnaby and Jones have to look for more murder motives. You'll find plenty of affairs, addictions and blackmail. (Text: ZDF)

Murrend Barnaby lets Joyce talk him into a wellness vacation in Swavely Manor. As soon as he relaxes, Joyce discovers a corpse next to him in the salt bath. The dead is the rich Kitty Pottinger, repeated on alcohol withdrawal here and the last hope of the operating couple Phoebe and Luke Archbold. Because Swavely is on the verge of financial collapse. Wellness vacationer Barnaby entrusts Jones with investigating the whereabouts of Kitty's ordinary husband Kenny. When Luke is found crushed by one of his fitness machines, Jones is rock-solidly convinced of the perpetration of the scrappy Carter. Between Carter, the friend of Phoebe's literarily ambitious sister Miranda Bedford, and the ambitious Luke, hatred prevailed at first sight. The two sisters dispute the rights to the property and make life difficult for each other. Barnaby doesn't trust the all too obvious clues and isn't right about it. Therapist Cloud reads his aura and tells him on his head that he is afraid of his upcoming birthday. She's right. His father died on the same birthday. (Text: ZDF)

Picture + sound: Everything stays the same here: Sharpness, coloration and contrast are on a good TV level in the brighter scenes, only in darker moments there are smaller blurs and slight picture noise. The stereo sound is absolutely convincing with the powerful and easily understandable mixed dialogues and the well tuned music. Good!

Extras: To say goodbye there is an interview with Barry Jackson alias Dr. Bullard on DVD 4 (ca. 12:03 min.) and with Tom Barnaby himself on the fifth disc (ca. 10:50 min.). In the short conversation, John Nettles tells, among other things, why he decided to retire the popular Inspector and what his plans are for the future. For fans a nice encore.

Fazit: Goodbye, Tom Barnaby! The twentieth DVD box by "Inspector Barnaby" brings not only five new cases of the popular investigator, but also his well-deserved retirement after 81 episodes. Although this doesn't mean the end of the series, as Barnaby's cousin John alias Neil Dudgeon takes the helm, it's a clear cut for fans, which turns out to be a bit melancholic. But until then, the viewer is offered five more episodes with the usual mixture of crime thriller, British humour and genuine Midsomer flair. And as a farewell bonus there are even two more interviews worth seeing. If there was always a "recommendable" box for the previous boxes, this twentieth box is really an absolute must for fans!