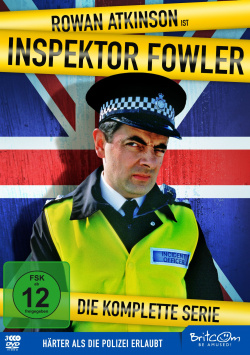 Contents: In the small town of Gasforth near London the world is still fine. Inspector Raymond Fowler (Rowan Atkinson), a policeman of the old school, who can quote every paragraph of the code and adheres to it meticulously, but who doesn't only seem to have stuck with his views in the past. That causes all sorts of chaos on the precinct again and again, that drives especially the criminal investigator Derek Grim (David Haig) regularly to the edge of the nervous breakdown. The fact that the other colleagues Bob Kray (Kevin Allen), Maggie Habib (Minar Anwar), Frank Gladstone (Rudolph Walker), Kevin Goody (James Dreyfus) and Patricia Dawkins (Serena Evans) aren't real showpiece cops either doesn't make things any easier. And then there's the fact that Fowler's been dating Dawkins for ten years and they're suffering from his increasing sexual disinterest. And even if crimes are really rare in Gasforth, it never gets boring at the police station...

"Inspector Fowler" reunited the "Blackadder" Dreamteam author Ben Elton and leading actor Rowan Atkinson in 1995. For Atkinson, the series was of particular importance as a follow-up project to "Mr. Bean", as he wanted to present something to his audience that was as far away as possible from the (almost) non-verbal cult figure. The result was an amusing ensemble comedy that took the daily police routine in a small English town for a ride with ambiguous puns, a little slapstick and a pinch of social comedy. Even though the success of "Mr. Bean" could not be repeated and was already over after two short seasons, "Inspektor Fowler" has also achieved a certain cult status over the years. And now it's finally possible to check on DVD in Germany why this is so.

The series is staged in a very classic comedy style. The characters are exaggerated stereotypes that are very amusing precisely because of the exposure of their all too human weaknesses. The humour arises primarily from amusing misunderstandings and unintentionally slippery dialogues, the bite of which is, however, somewhat lost in the German dubbed version. If you speak English, you should definitely choose the original English sound on the DVD, which is even more funny.

What speaks for the quality of the series is that it still works really well even after almost two decades. Some aspects of the staging seem a bit antiquated and some gags are quite dusty. But all in all, the 14 episodes of the two seasons still provide many really good laughs today, for which Rowan Atkinson and James Dreyfus in particular are responsible with his completely exaggerated portrayal of the stupid P.C. Goody. "Inspektor Fowler" may not be a great comedy classic, but the series is a lot of fun. And that's why for all Rowan Atkinson fans and lovers of classic Britcoms the following applies: absolutely recommendable!

picture + sound: The picture is available in the original 4:3 TV format. And also otherwise the age of the series is quite noticeable in the technical implementation of the DVD. However, although there are a few smaller scores in the area of image sharpness and some minor soiling can also be detected, the picture quality for a TV comedy is still on a good level. The same applies to the stereo sound, which does its job absolutely satisfactorily - reproducing the amusing dialogues in a way that is easy to understand. Good!

Result: Rowan Atkinson's rather short-lived series "Inspektor Fowler" is not as funny as "Mr. Bean" and not quite as clever as "Blackadder". Nevertheless, the comedy series from Ben Elton's pen offers enough wit and bite to be able to entertain even after almost twenty years. Especially in the original English version, which thanks to this DVD release can now also be enjoyed in Germany, many of the gags still ignite and provide for almost seven extremely entertaining hours. Even the missing extras do not really have a negative impact. For lovers of classic Britcoms absolutely recommendable!