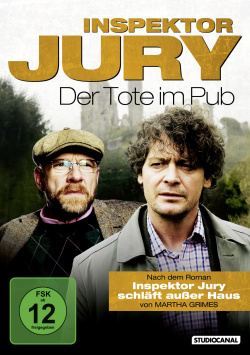 Inspector Jury - The Dead Man in the Pub

Contents: Inspector Richard Jury (Fritz Karl) is the best man at Scotland Yard. And so it is hardly surprising that he is called to the coastal village of Long Piddleton when a man is mysteriously killed in the local pub. Together with his colleague Wiggins (Arndt Schwerning-Sohnrey), the jury first has to find out who the victim is, as the man had given a false name when checking into the guest house in the pub. While some of the villagers who interview them seem to be very taciturn, the somewhat pushy Melrose Plant (Götz Schubert) and his aunt, the crime writer Agatha Andry (Katharina Thalbach) are a little too helpful, which not only annoys the jury, but also hampers his investigations a little. But when after a short time another corpse is found, the case takes on ever clearer forms for the clever investigator...

The books around "Inspector Jury" by the American author Martha Grimes have enjoyed great popularity among crime thriller fans since 1981. Grimes has already written over twenty books about the Scotland Yard investigator. The first novel was filmed by ZDF in southern England. The Austrian Fritz Karl was hired as the leading actor. As a very individual investigator he cuts a really good figure and the British humor, which the script is quite keen on, is most likely to hit the target of all actors. Edzard Onneken, who also directed the series "Türkisch für Anfänger" (Turkish for Beginners), staged a very atmospheric thriller that is beautiful to watch almost every second.

However, even though "Inspektor Jury" is able to compete with his colleagues Barnaby, Lewis and Co. on a purely visual level, he doesn't really want to succeed in this in other respects. The staging can hide its German roots as well as the play of the actors. Here simply the typical British note is missing, which would have been necessary, so that the whole thing doesn't seem so "played". As praiseworthy as the attempt to dare to film the world's first ever adaptation of the popular Martha Grimes novels may be, it must unfortunately be said that the result has not reached the international size of the original book.

Whoever accepts this can have fun with this comedic thriller. Because besides Fritz Karl's lively playing, Götz Schubert as a somewhat overzealous Melrose Plant also provides some very amusing moments. In addition, the story based on the "Jury" volume "Inspector Jury Sleeps Outside the Home" is also entertaining and without any noteworthy lengths. Anyone who likes German crime fiction with a slightly comedic touch and appreciates a British flair on a visual level will certainly overlook the smaller weaknesses and have a lot of fun with this Martha Grimes film adaptation. And for these viewers the following also applies: definitely worth seeing!

Picture + sound: The technical implementation is on a good TV level. The picture is clean, the overall sharpness is satisfactory and the detail can also be convincing in many moments. The colours are mixed attractively, so that the picturesque landscapes come into their own. The sound presented in a stereo mix is primarily determined by the dialogues, but from time to time the music and ambient noises also create a harmonious atmosphere. Good!

Extras: As bonus there is a short look behind the scenes (approx. 9:48 min.), some funny outtakes (approx. 4:05 min.), as well as further program tips of the offerer to see.

Result: Mit "Inspector Jury - The Dead Man in the Pub", ZDF now dares to try British crime food itself. The inspector conceived by the American writer Martha Grimes is brought to life by Fritz Karl and the atmospheric locations are also very successful. But overall the movie seems to be too "played", as actors and dialogues despite all efforts are anything but "very british". Nevertheless, the whole thing is enough for 90 entertaining minutes, which lovers of German crime food can confidently enjoy with a humorous touch. The DVD is technically well done and also has some bonus material to offer. Recommended