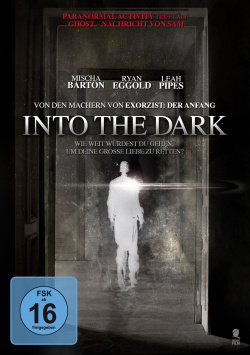 Into the Dark - DVD

Contents: After losing her parents to cancer within only six months, a world collapses for photographer Sophia Monet (Mischa Barton). She withdraws completely from life and even the most intense attempts of her buddy Sam (Jaz Martin) to free her from her lethargy fail. But then one evening Sophia literally runs into the arms of the charming Adam Hunt (Ryan Eggold). The chemistry between the two is right from the first moment, and Adam can even persuade the shy Sophia to take part in a tour of the Weldon Towers where he lives and where he is supposed to haunt. Although it was clearly sparking, Sophia needs some time until she is ready to meet Adam again. And it won't be long before they become a couple. But their happiness does not last long. Because one night Adam disappears without a trace from his apartment on the 21st floor of the Weldon Towers. The police have found no evidence of any crime. But Sophia is certain: Adam was taken to the top floor, where he is supposed to haunt. Together with Sam, his girlfriend Penny (Melinda Y. Cohen) and Adam's roommate Astrid (Leah Pipes) she sets off on a search - not knowing what horror awaits her...

"Into the Dark" begins very leisurely. In the first twenty minutes there is very little to indicate that anything like tension could arise here. Rather, the story takes on the characteristics of a romantic drama. This is not really disturbing due to the harmonious chemistry between Mischa Barton and Ryan Eggold. But nevertheless the feeling spreads that one should adjust oneself to a rather calm Schmonzette. But appearances are deceptive. After the worn introduction the movie turns into a mystery thriller with atmospheric horror elements.

What director Mark Edwin Robinson has staged here with relatively simple means isn't really new, but it's still something to be proud of. The scenes on the upper floor of the Weldon Towers are pleasing with classic goose bumps and an atmospheric look. Even though there is sometimes a lack of logic and some genre clichés are unpacked, the story here clearly increases in tension. At some point it becomes clear what Robinson's intentions are. The idea, which reminds a little of "Flatliners", has potential, but unfortunately in the end it is given away. For no matter how much time Robinson takes to carefully construct the story, the last act seems to have been rushed and confused.

Was it obvious that at least an attempt was made to evade the rules of the genre and to offer an end that doesn't actually offer a direct resolution, but rather determines the fate of the main characters in romantic gothic tradition. But there remain too many loose threads, too many unanswered questions, for this ending to really convince.

Beyond that, "Into the Dark" is a thoroughly successful romantic-gruesome hybrid, which can please Mischa Barton with an atmospheric staging and even something like acting talent. Not a masterpiece, but it's enough for an entertaining video evening. Worth seeing!

Picture + sound: The picture of the DVD is not very spectacular, but absolutely satisfying. There are no soiling or interference effects, the colour scheme is atmospheric and the sharpness of the images is fully convincing, at least in the brighter scenes. In the numerous darker moments there are here and there small point deductions in the detail display, but overall the positive overall impression prevails. The same applies to the sound, which has some subtle but effective surround effects to offer, especially in the second half. These do not only provide for a pleasant goose bump, but also for a little dynamism in the otherwise rather front-heavy happening. Good.

Extras: As bonus material there is unfortunately only the trailer as well as further program tips of the offerer.

Fazit: "Into the Dark" begins rather leisurely and lets a somewhat predictable love drama expect. But after about half of the running time the whole thing turns into a mystery-gruesome thriller, which can convince with decent actors, an atmospheric setting and some nice goose bumps. At the end the last kick is missing to lift the movie above the average. But this mystery thriller is enough for an entertaining and pleasantly exciting video evening, which is why, despite some dramaturgical weaknesses, there is a clear "recommendable" bottom line!