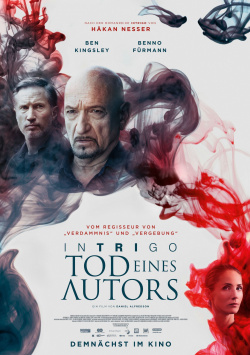 Intrigo - Death of an Author

The up-and-coming writer David (Benno Fürmann) visits the reclusive bestseller author Henderson (Ben Kingsley) to get his advice for a story. In it a man learns that his wife wants to leave him for someone else, of whom she is even pregnant. Blind with jealousy, the man forges a perfidious plan. Henderson is very taken with the following twist in the story, but also realizes that David told him his own story here. Now a cat-and-mouse game begins between the two authors, in which some secrets are revealed - but for what reason?

"Intrigo - Death of an Author" is based on a short novel written by the Swedish bestselling author Håkan Nesser about twenty years ago. The story is part of a newly compiled collection of short novels by the author, from which director Daniel Alfredson has filmed three stories for cinema. Alfredson, who had already shot two novels in a row from Stieg Larsson's "Millennium" trilogy, deliberately chose the great challenge of shooting three completely different films simultaneously. Read more in your interview HERE.

The film tells a cleverly nested story about guilt, atonement and revenge. It's a duel between two liars, but it never becomes quite clear which of them has the upper hand over the situation. The whole thing was deliberately kept atypical for the genre in bright pictures, which sometimes fake a real idyll. This forms a stark contrast to the inner life of the protagonists. An exciting and stirring story, told with a restraint and slowness that you have to get involved with, so that tension can really arise.

Benno Fürmann plays the elusive character, whose reprehensible action is nevertheless somehow comprehensible, very convincing. This becomes especially clear in two quite intense scenes, which Fürmann masters with bravura. Ben Kingsley, on the other hand, plays very routinely and almost a bit bored, whereas this can be seen as a deliberately used move of his character Henderson. Because he wears a mask, behind which it bubbles enormously - but what he doesn't want to reveal to David at any price.

"Intrigo - Death of an Author" is a thriller and psychogram at the same time. A good, but also a bit tough movie, that can be recommended to lovers of calmer thriller fare. Worth seeing