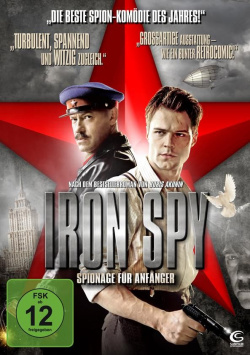 Film: April 1944: fascist Germany prepares an attack on the USSR. After the unexpected war against Yugoslavia prevents the attack, Hitler plans an unexpected and devastating attack, which is to be launched from within with the help of a spy called "Water". The Russian secret service employee Igor (Danila Kozlovsky), a passionate boxer and language genius, is hired by the state security to expose "water" and prevent his possible attacks. Together with Starschi Major Oktjabrski (Fedor Bondarchuk), he is preparing to intercept a secret cargo that could serve to prepare the German attack on the USSR. But he has no idea how dangerous this job really is and how close the feared attack is already...

"Iron Spy" reminds us of the satire "Iron Sky" with its title chosen for the German release. But the similarities stop with the title. While "Iron Sky" was filled with humorous absurdities and satirical exaggeration, "Iron Spy" is, despite some humorous elements, more of a classic espionage thriller, which relies more on suspense and drama than on humor or even fantastic elements. Especially at the beginning it works quite well. The story that is built up here has a lot of tension potential and also the relationship between Igor and Major Oktjabrski promises a good entertainment value.

The action sequences, which at times remind strongly of the visual style of Timur Bekmambetov, as well as some nice special effects give the film a catchy look. In spite of all these positive aspects, "Iron Spy" doesn't get beyond good average in the end. The dramaturgy just isn't mature enough to captivate the audience until the end and in the moments when the viewer should have an emotional reaction the whole thing stays too cool. The movie's entertaining, that's out of the question. But the potential that he reveals at the very beginning is only partially exploited. Instead of great suspense there are too many lengths, pathos and stilted dialogues.

Who appreciates classic espionage thrillers and can do without a sophisticated story and emotionally accessible characters for a few pretty moments, will certainly enjoy "Iron Spy". But those who value authenticity, historical accuracy and sophisticated dialogues will probably not be able to make friends with this spy. However, there is one thing for the entertainment value, which is quite good: Seeing!

Picture + Sound: The visual realization of the film for the DVD convinces with a high overall sharpness, which, however, has the consequence that some computer effects are very clearly recognizable as such. The colouring is harmonious, there are no appreciable picture disturbances or soiling. The sound pleases with a clear reproduction of the dialogues, as well as with some well implemented sound effects, through which the surround channels are demanded again and again. Good!

Extras: Unfortunately, as a bonus there is only the trailer and further program tips of the provider.

Fazit: Even though "Iron Spy" with its title evokes associations with the satire "Iron Sky", Aleksey Andrianov's film is much less humorous and more of a classic espionage thriller, with some good moments of suspense and a successful visual realization. The DVD is technically well done, only in terms of bonus material the disc weakens a bit. Nevertheless: if you can overlook a few dramaturgical potholes and appreciate old-school espionage thrillers, you can take a look here.