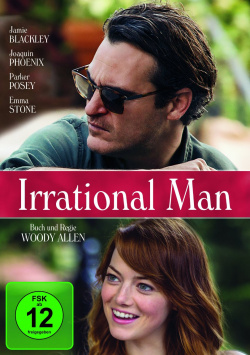 Film: When Abe Lucas (Joaquin Phoenix) takes up his lectureship at a contemplative small-town college, for him this is only the culmination of a life marked by irrelevance. Unenthusiastic, he gets involved in an affair with his colleague Rita Richards (Parker Posey) and never misses an opportunity to numb his mind with alcohol. Only in the presence of the student Jill (Emma Stone) does Abe blossom regularly. But not enough to give his life a new meaning. For he only finds out when he and Jill accidentally overhear the conversation of a woman talking about how much she has to suffer from her moody, violent husband. When Abe hears this, he makes a decision that flips a switch inside him. Completely intoxicated he can suddenly enjoy his life and love again. But he doesn't know what consequences his decision will have and that he is about to lose his newly found happiness again…

"Irrational Man" may not be one of Woody Allen's best movies. But even if the director's oeuvre is only midfield, this still means that this mixture of drama and comedy, seasoned with a pinch of crime thriller, is a really good film. The whole thing starts off a little sluggish and suggests a slight triangle relationship comedy. But when Abe discovers a new meaning in his life, the whole thing not only takes a clear thematic turn. The tone of the production also changes. She gets a bit more lively, but also shows a little bit of bitter-cynical humor. More and more one feels as a spectator, how Allen again comes to the best form here.

The actors do not offer any real surprises in their performances. They all play more or less as you know them - especially Joaquin Phoenix and Emma Stone - and as you probably expect them to. However, even if they move on quite safe terrain, this doesn't diminish the pleasure that the viewer has in watching them fill their characters with life. The fact that the chemistry between Emma Stone and Joaquin Phoenix is perfect can also be seen as a great advantage.

The dialogues are not the best that Allen has written so far. But they are still full of multi-layered cleverness and wonderful wit. Allen always finds the right balance to give the story the seriousness it needs to function. So if you have a general weakness for Woody Allen's movies and don't expect a shallow romantic comedy, then "Irrational Man" can really be recommended to you. Absolutely worth seeing!

Picture + sound: The audiovisual realization of the film is on a good level, whereby the sound remains very reserved due to the genre. In some moments the Dolby Digital 5.1 mix is pleasantly lively, but over long stretches the dialogues, the reserved soundtrack and general calm dominate the action. The picture of the DVD is absolutely clean and pleases with warm colors and a good overall sharpness, which doesn't disappoint in the detail display either. Good!

Extras: That Woody Allen doesn't like a friend of bonus material has long been known. Therefore, no making of, cut scenes or even an audio commentary can be expected from his films. I'm afraid it's the same here. As a bonus there are only impressions from the film premiere in L.A. (approx. 3:32 min.) with short interview sequences and a picture gallery. Too bad.

Fazit: "Irrational Man" is another successful example of Woody Allen's versatility. The mixture of comedy and drama may not be one of the director's best films. He's an enormously entertaining guy. The story, which starts off a little slow, takes a surprising turn at about halftime, which gives the film its very special touch. The good actors and the usual clever dialogues make sure that "Irrational Man" is a really good Woody Allen movie, even though it's a little bit of a hangover. The DVD pleases with good picture and sound quality, but bonus material is again - as typical for Allen's films - scarce. Nevertheless: clearly recommendable!