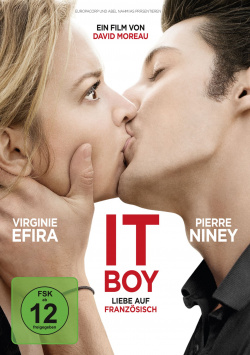 Contents: 38-year-old Alice (Virginie Efira) is a career woman through and through. She is fully committed to her job at a major fashion magazine and would therefore be predestined for the position of editor-in-chief. But unfortunately she is regarded as extremely uptight, which has so far prevented her boss from giving Alice even more responsibility. When she loses an important USB stick on a flight, which her seat neighbor, the 19-year-old Balthazar (Pierre Niney), finds, a misunderstanding occurs that could bring Alice a decisive piece closer to her dream job: because when she meets with the boy to get the USB stick back, she is observed by colleagues who spread the rumor in the office that Alice has taken a young lover. As her boss is taken with this whole new side of his co-worker, Alice decides to keep the truth to herself and use Balthazar to get the desired promotion. But is it really that easy to shamelessly exploit a lovable young man without falling for his charm or getting a guilty conscience?

After director David Moreau has moved more on horror paths with the intensive home invasion thriller "Them" and the US production "The Eye", he tries his hand at a light romantic comedy with "It Boy - Love in French". Moreau's staging is rather common and does not take on new sides in the genre. Nevertheless, he succeeds in wrapping up well-known things in a very charming and amusing way, so that his love comedy doesn't give rise to a second of boredom. This is not only due to the decent narrative speed, but first and foremost to the two sympathetic main actors.

Although Alice with her career-oriented behavior, for which she uses other people and keeps her emotionally at a distance, is not exactly a prime example of a popular figure, Virginie Efira succeeds in giving her a very engaging personality, which makes it very comprehensible to the viewer that Alice is not a calculated ice queen, but a woman driven by deep insecurity and loneliness, who simply goes the wrong way to fill a personal void. At her side, Pierre Niney, known from "LOL", acts as a somewhat naive, but very likeable romantic, who believes in the very big love that bridges even clear differences in age - and who of course is all the more disappointed when he finds out the truth about Alice and her feelings.

Surely, you've seen it all before, some of it maybe even a little better. But that doesn't change the fact that "It Boy - Love in French" is simply fun, has some very enchanting moments to offer and, as a lover of French romantic comedies, ultimately releases you into reality with a smile on your face. If you don't expect a revolution in the genre and just want to enjoy 90 minutes of good entertainment that touches your heart, this DVD premiere is absolutely recommended! Worth seeing!

Picture + sound: The picture of the DVD shows a satisfactory overall sharpness and pleases with a very pleasant, warm coloration. There are no real weak points here, just like with the Dolby Digital 5.1 Mix. The latter is somewhat reserved overall. But that's actually usual for a romantic comedy, as the dialogues and the music are clearly in the foreground. Good!

Extras: The DVD does not have much additional material to offer. The Making of is a 2 minute long promo spot and also the interview with lead actress Virginie Efira (ca. 8 min.) isn't very profound. The trailer for the film and other program tips from the provider complete the bonus offer. Somewhat lean.

Fazit: "It Boy - Love in French" is a very nice romantic comedy, which scores particularly with its charming leading actors and some very amusing scenes. Director David Moreau hasn't really reinvented the wheel here. But since he presents well-known things in a very likeable, sometimes amusing and lovable way, his film is absolutely recommendable for all lovers of French romantic comedies!