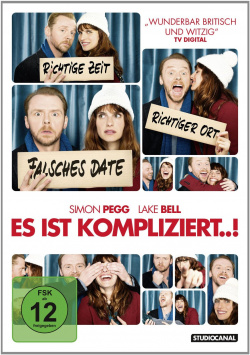 Film: The mid-thirties Nancy (Lake Bell) has long since given up hope that she will run into the right one again. Blind Dates hates her, so it's much nicer to sit in comfortable clothes in front of the TV, watch "The Silence of the Lambs" and eat unhealthy things. The journalist doesn't want to hear relationship advice from anyone, not from her married sister Elaine (Sharon Horgan) and certainly not from a young, naive thing like Jessica (Ophelia Lovibond), who meets Nancy on the train on the way to her parents. But then it is Jessica of all people who unintentionally turns Nancy's life completely upside down. When she meets their blind date Jack (Simon Pegg) at the train station in London and he thinks she's Jessica, Nancy doesn't clear up the mistake. Because between her and the sympathetic single man it clicked immediately. And Nancy just can't pass up this chance. And so an almost perfect evening begins for the two of them - if it weren't for this one big lie…

"It's complicated…" is a romantic comedy that's refreshing in every way, which scores with a very authentic, charming and funny leading actress and a no less good co-star. The chemistry between Lake Bell and Simon Pegg ("Shaun oft he Dead", "Star Trek", "Mission: Impossible") is just perfect and from the very first meeting of the two you wish that they would find each other despite the big lie. Yes, the way to the inevitable happy end is of course very clichéd and predictable, but the very likeable actors, the cheeky dialogues and some really surprising jokes make the movie stand out from the crowd of similar comedies.

Except for the somewhat overdrawn character of Sean (Rory Kinnear), who is morbidly in love with Nancy and who is responsible for the unnecessarily flat gags of the movie as well as some good laughs, the side characters are also drawn very realistic and lovable. This is especially true for Nancy's parents, who are waiting for their daughter at the celebration of her 40th wedding anniversary. Director Ben Palmer has perfectly managed to trace what the great love looks like after 40 years: something ordinary, interspersed with a little hate and love, but also pure tender harmony and friendship. It is enough to look at them to see that they love each other with all their hearts, despite their little teases. And that's exactly what you want for Nancy and Jack, too.

Ben Palmer, who celebrated great success with the series "The Inbetweeners", the template for the two "Sex on the Beach"-movies, doesn't completely renounce dirty gags and brute humor. However, on the one hand it stays within bearable limits and on the other hand the somewhat coarser moments are served with so much charm that every form of possible foreign shame is nipped in the bud and replaced by hearty laughter. Admittedly, nothing is actually offered here that you haven't already seen somewhere else. But when your favourite dish is presented to you in a slightly different way, it can taste quite different and damn tasty. And that is exactly the case here. "It's complicated" is a must for all lovers of cheeky romantic comedies. A magical and extremely funny movie that makes it impossible not to fall in love with Lake Bell and/or Simon Pegg as well. But there is a very clear one: Absolutely worth seeing!

Picture + Sound: The picture and sound quality of the DVD corresponds exactly to what can be expected from a current cinema production. The picture is absolutely clean, the colour scheme is harmonious and the contrasts are also on a good level. The Dolby Digital 5.1 Mix sound, as usual for the comedy genre, doesn't ignite a big surround firework. Dialogues and music are more in the foreground. But there is also always audible movement in the multi-channel range, which can create an overall very positive impression. Good!

Fazit: "It's complicated…" is a cheeky Romantic Comedy, which presents already known charmingly varied. The two likeable main actors and some really funny dialogues make the movie a must for all viewers who like it romantic, but also a little bit coarser. The DVD presents the film in atmospheric picture and sound quality and the bonus material pleases with a good making of. For all this there is a very clear one: Absolutely recommendable!