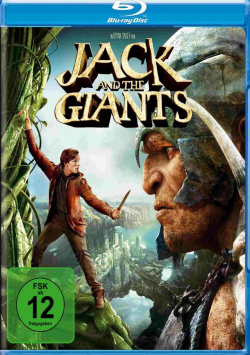 Jack and the Giants - Blu-Ray

Film: The legend of Hans and the bean tendril, known in English as "Jack and the Beanstalk", has been around for centuries in many different variations. Even though the first written version was written in 1807, there are motives of this fairy tale in many different cultures under different names, which can be traced back to the 12th century. And to this day this exciting fairy tale still enjoys great popularity. Now also "X-Men" director Bryan Singer has taken care of the saga and has freely staged his very own version of the adventure story based on motives of "Hans und die Bohnenranke" and the older "Jack the Giant Killer".

In "Jack and the Giants" Singer tells about the young Jack (Nicholas Hoult), who is only supposed to sell his uncle's horse and cart, but unintentionally comes into possession of some magic beans. When they get wet, these open a gate between the world of men and the realm of the bloodthirsty giants who live above the clouds. Just as the beautiful and spirited Princess Isabelle (Eleanor Tomlison) seeks shelter in Jack's house in the pouring rain, the unbelievable happens: one of the beans gets wet and in a few seconds a huge tendril of beans grows into the sky, which takes the house together with the princess with it. When the desperate King Brahmwell (Ian McShane) sends a rescue squad to rescue Isabelle, the rather fearful Jack joins the noble knight Elmont (Ewan McGregor) and his men. He does not suspect that the greatest danger does not come from the giants at the end of the bean tendril, but from Isabelle's fiancé, the sly Roderick (Stanley Tucci). Because he pursues a particularly cunning plan, which could cost not only Isabelle, but also every single inhabitant of the kingdom his life...

"Jack and the Giants" is an entertaining fantasy adventure, which is clearly aimed at a younger audience, but also turned out to be relatively gloomy. There are always jokes suitable for children, which sometimes even drift slightly into silliness. On the other hand, the world that Singer and his team have created is not colorful and playful, but rather rough and threatening. Thus the whole thing doesn't seem like a pure children's film, but like a big adventure that even older fairy tale fans can enjoy.

The film captivates less with its story or the sophisticated dialogues, but primarily with its effects. Although the giants in particular cannot deny their computer origins, the world above the clouds and its inhabitants can really be seen. The film's extremely high budget of allegedly up to 200 million dollars makes itself felt here in a very impressive way. Even though the script can't really do justice to the visual realization, it at least makes up for some of the dramaturgical weaknesses.

All in all, the actors act as one might expect in a fairy tale like this. While Nicholas Hoult convinces as a youthful hero against his will, Ewan McGregor successfully plays with refreshing ease against the nasty hairstyle he was given for this role. Only the villains of the story, Stanley Tucci and Ewen Bremner as his idiot sidekick, play a little overexcited. Tuccis Roderick in particular would have been wished for a little more threat, which would certainly have increased the actually decent tension level of the story.

The bottom line remains the feeling that "Jack and the Giants" can't fully exploit its existing potential. Whether director, actors and all other creative minds behind the scenes, they have all brought obvious talent and many good ideas to this large-scale production. And yet the fantastic action at the end seems too arbitrary, too interchangeable to leave a truly lasting impression. Surely, the whole thing is a fairy tale, that follows the strict rules and doesn't offer any real surprises. As such, the film also works very well. But the big aha effect just doesn't want to happen. As a spectator, you always wait for something special, something spectacular that just doesn't come. A few wild giants are just not enough to really be able to offer more than nice fantasy entertainment. But if you don't expect anything more than an exciting, sometimes amusing fairy tale told in a captivating way, you can confidently climb up the bean vine with Jack and have a lot of fun in the realm of the giants. Worth seeing!

Picture + sound: As was to be expected, the film is technically very convincing. The image of the Blu-Ray is absolutely clean and has a very good image sharpness, through which the richness of detail of the film is shown to advantage. The colour scheme, the matching of the contrasts and the good image depth, which is also recognisable in the 2D version, also support the positive overall impression. The sound is in no way inferior. The surround channels are used again and again thanks to well implemented sound effects, whereby the rich basses ensure that the world of the giants, but also the living room at home is not only in the strong rumbling again and again. Very good!

Extras: The Blu-Ray extras are somewhat disappointing. Besides a few edited scenes (about 8 min.), where an unfinished animated alternative opening sequence takes most of the time, and outtakes (about 3 min.) there is also the interactive game "Become a Giant Conqueror". Here the spectator can climb up a beanpole with the help of the remote control, and wrong decisions can lead to a dead end or a crash. On the way up there is the possibility to watch some short Making of Clips. The fact that there is no possibility to look at these features separately is a bit annoying in the long run. Because it can happen that you need several attempts until you can really watch all the clips. Since the design is more aimed at children, but the content at the same time at older viewers, this interactive feature can't really be called a success. Too bad!

Fazit: "Jack and the Giants" is a great fantasy adventure with a lot of potential, but it is not fully exploited. Despite some very good scenes and a high entertainment factor, the movie remains too ordinary and interchangeable to leave a lasting impression. But if you don't expect more than a dark fairy tale with good effects and some amusing interludes, this Blu-Ray can be recommended to you!