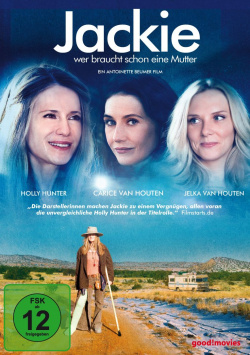 Jackie - Who needs a mother - DVD

Film: The twin sisters Sofie (Carice Van Houten) and Daan (Jelka Van Houten) couldn't be more different. While Single Sofie lives only for her job and focuses on her calculated career planning instead of feelings, Daan longs for harmony and happiness. Growing up with their two gay fathers, the sisters never met their mother. But this is supposed to change 33 years after her birth when she receives a call from the USA: her biological mother Jackie (Holly Hunter) is hospitalized with a complicated fracture and has no one to take care of her. Daan succeeds in persuading Sofie to fly to America together to meet the woman she had delivered for her fathers. For the sisters a journey begins in which their lives and their relationship to each other are completely turned upside down...

"Jackie - Who needs a mother" is a very special road movie. Director Antoinette Beumer, who recently had great success in her home country with the remake of the Flemish thriller "Loft", tells the story of an unusual family reunion with a lot of humor, but also a lot of emotion, without drifting into the feared kitsch. There are three aspects in particular that make the movie work so well. The first and probably most important aspect is the chemistry between Carice and Jelka Van Houten. The two may not be twins in real life, but the fact that they are sisters is more than positive to their perfectly harmonizing play. Although Sofie and Daan are completely different characters, as sisters they seem absolutely believable, which is a great advantage not only in the more emotional moments, but also in the comedic timing.

The second aspect is that the bilingualism of the original version has also been preserved in the German version. Holly Hunter and all the other English-speaking actors were not dubbed, only subtitled. Thus the film gains in authenticity and atmosphere, which are also promoted by the third aspect. This is a glimpse of the USA as it is rarely seen in cinema. Far away from all Hollywood clichés, Sofie and Daan travel with Jackie through a country where people somehow look quite normal and not like the typical Hollywood beauties, where there is a lot of visible poverty and rough but beautiful landscapes.

The impression, which is very positive because of these three aspects, is only clouded by the fact that Beumer uses some almost annoying clichés here and there, which the movie wouldn't have needed at all for its entertainment value or its emotional effect. So it is already clear at the beginning of a scene in which Daan tries her hand at singing in a bar while Sofie dances with a guest, that they are harassed when leaving the bar in front of a group of very pushy hillbilly girls. Not only that this sequence doesn't want to fit into the context, unlike most of the other scenes in the film, it also seems completely predictable and tired.

Although the ending isn't necessarily a prime example of credibility and the transformation Sofie and Daan go through on their journey almost has something fairytale about it, in the end a very positive overall impression prevails. The three main actresses are simply great, whereas Holly Hunter in particular leaves a lasting impression with her quirky, silent performance, the beautiful recordings of the desert of New Mexico and the great soundtrack, on which Jelka Van Houten also proves herself to be a very talented singer, make "Jackie - Who needs a mother" a very good mood movie, which not only female fans of charming arthouse comedies can enjoy. Worth seeing!

Picture + sound: The great landscape shots of the film also come into their own in home cinema thanks to a harmonious color scheme, good contrasts and a tidy image sharpness. The sound is available in a Dolby Digital 5.1 mix as well as in a stereo mix. Both soundtracks transport the dialogues powerfully out of the speakers, but show little movement in the surround range. All in all this is enough for a satisfied one: Gut!

Extras: The bonus material of the DVD is unfortunately only available in the Dutch (and partly also in English) original without subtitles. In the offer are some cut Sznen (approx. 17:56 min.), a Making of (approx. 10:05 min.), as well as Outtakes (approx. 3:10 min.). The trailer for the film completes the additional offer.

Fazit: "Jackie - Wer braucht schon eine Mutter" is a very good mood film, which shows some lengths and unnecessary clichés, but can make up for these weaknesses with three wonderful main actresses, beautiful shots of the desert of New Mexico and a great soundtrack. The DVD is technically well done, only the missing subtitles in the bonus material have a negative impact. But all in all there is still a clear one: Recommended!