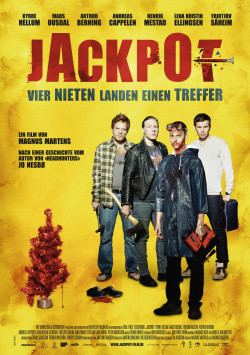 Every year there comes a time when colorful Christmas decorations decorate department stores and make the home especially festive. However, the days when the Christmas tree had to be green are over with the growing popularity of artificial trees. There are silver, golden or blue Christmas trees - and also red ones. However, these are created in a very special, not at all Christmassy way. How is shown by bestselling author Jo Nesbø together with director Magnus Martens in the raven-black comedy "Jackpot".

At the centre of the rather macabre action is Oscar (Kyrre Hellum), who works as a supervisor in a factory where ex-Knackis produce plastic Christmas trees. One day Oskar wakes up in a strip club, surrounded by corpses and the police, who naturally want to find out what happened here. And unfortunately Oskar is not only the only witness, but is also suspected of having done so. But Oskar doesn't even think about blaming himself for the bloodbath. And so he wants to tell the investigating commissioner Solør (Henrik Mestad) everything he can remember. But the story of how the three former inmates Thor (Mads Ousdal), Billy (Arthur Berning) and Tresko (Andreas Cappellen) persuaded him to form a betting community, with which the four men actually won the big jackpot, does not find much favour with the commissioner - until Oskar comes to the point where it was a question of the distribution of the profits&.hellip;

"Jackpot" provides 86 minutes of extremely good entertainment with a nested narrative, through which the individual pieces of the puzzle of the story gradually come together to an amusing overall picture, as well as with some wonderfully macabre ideas for lovers of the somewhat darker humor. In many moments this is typically Scandinavian, dry and calmly staged. A lot of pacing can only be expected in a few scenes. But whoever appreciates the humor of nordic gangster comedies will be able to burst into a hearty laugh many a time.

Of the many plot twists, of course, not too much shall be revealed at this point, even if attentive viewers can guess the ending long before its revelation. For it is the many small unexpected things, filled with macabre scurrility, that make "Jackpot" so much fun. Surely, the wheel is not reinvented here and there, and here and there the humour also beats a little over the strands. However, even though the movie isn't a real "jackpot" in itself, it doesn't just torture the viewer with unnecessary boredom for a minute, but offers all those who like it a bit more grotesque the best entertainment of the bloody kind. For all friends of Scandinavian humour this somewhat different Christmas film is an absolute must and absolutely worth seeing!