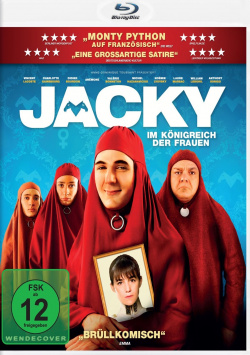 Jacky in the Kingdom of Women - Blu-ray

Film: In the distant People's Republic of Bubunne men have little to say. While the women run the affairs of state and hold all the important offices, the veiled men have to run the household and simply look good. Those who rebel against it will be tried without long negotiation. 20-year-old Jacky (Vincent Lacoste) has long since resigned himself to his role in his country. There is no room for revolutionary thoughts anyway, as he thinks day and night only of the future dictator Bubunne XVII (Charlotte Gainsbourg), with whom Jacky is hopelessly in love. When he learns that her mother is going to choose a husband for her daughter at a big ball, Jacky does everything she can to participate in this ball. But before he knows it, he is suddenly part of an underground movement fighting for the rights of the men in Bubunne. And so his great love could quickly become his most bitter enemy...

"Jacky in the Kingdom of Women" offers many very amusing ideas that reveal the potential for an extremely biting satire. There are a few moments when director Raid Sattouf can fully exploit this potential. In these scenes the laughter gets stuck in your throat as a viewer, as the humor is served with an incredibly bitter sharpness. Unfortunately, this is far too rarely the case. No question about it, Sattouf has succeeded in creating a very unadapted, original work solely from the atmosphere and the visual language. But the sometimes surprisingly flat jokes, which he has incorporated into his script, ultimately prevent "Jacky in the Kingdom of Women" from unfolding its full quality.

This is a real pity, especially in view of the successful finale. Because the last attitude is a bitterly evil side blow to the hypocrisy of many a justice fanatic. This last minute offers more social criticism through a shot and a subsequent reaction than so many less subtle moments of the film. Here the script reveals a level of intelligence that is missing from many dialogues and gags before. As funny as some of the ideas of the holy little horse are in the core, in the end there remains a very unbalanced, rather disappointing overall picture. What this comedy deserves to be credited with, however, is that you won't soon forget this movie. Because such a story has simply not yet been seen in this form - and that has a corresponding effect. But those who hope for an all-round successful satire because of the good basic idea will be bitterly disappointed. And that's why there's only one left because of the originality and some really good moments: worth seeing with a few exceptions!

image + sound: The Blu-ray image is absolutely clean and presents the action in warm, powerful colors. This underlines the very special atmosphere and visual language of the film very well. The overall sharpness is on a very good level, whereby even smaller details are usually shown to advantage. The sound is available in a pleasantly lively DTS-HD Master Audio 5.1 mix, which allows the voices to be heard clearly and intelligibly on the soundtrack and the various smaller sound effects coordinated from the loudspeakers. Good!

Extras: Except for the trailer and further program tips of the provider, the disc unfortunately has no bonus material to offer.

Fazit: "Jacky in the Kingdom of Women" is a bitterly evil satire with a very unusual atmosphere that makes the film a truly extraordinary experience. However, some gags are surprisingly flat, which means that much of the existing fire is lost. The last shot shows how much intelligence and cleverness there is in the basic idea of the story, which director Raid Sattouf unfortunately only makes use of at times. The Blu-ray presents the satire in adequate picture and sound quality. Unfortunately, there is no bonus material worth mentioning. In spite of some weaknesses, there is a clear one only for the discussions that could trigger the final: Recommendable!