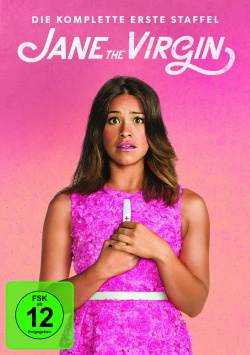 Film: 23-year-old Jane Villanueva (Gina Rodriguez) has sworn as the little girl of her grandmother Alba (Ivonne Coll) that she will remain a virgin until her wedding. And since she's a good girl, she's stuck with it until now. Her boyfriend Michael (Brett Dier) can't stand the waiting, but he respects Jane's wish, because she is his absolute dream woman and he wants to marry her. But then, during a visit to the gynaecologist, a fateful mix-up occurs: instead of a routine smear, Jane is injected with the sperm of Rafael Solano (Justin Baldoni), who was actually intended for his wife Petra (Yael Grobglas). Now Jane is still a virgin, but still pregnant - and of all people with the child of her former swarm and current boss. This is the perfect material for a telenovela - especially since there is also a murder, secret affairs and the secret about Jane's father, which her mother Xiomara (Andrea Navedo) has so far perfectly kept. And as if all this wasn't already turbulent and confusing enough, Jane also starts to doubt her feelings for Michael and to feel drawn to Rafael…

"Jane the Virgin" is a very free adaptation of the Venezuelan telenovela "Juana la virgen". However, the makers only took over the basic idea and created something very special out of it, which has elements of the classic telenovela, but at the same time also satirizes it very charmingly. This is already made clear by the ironic off-commentary that accompanies the event. But also the game with exaggerated clichés makes the series a lot of fun. However, "Jane the Virgin" is not a pure comedy series. Rather, she also makes very effective use of dramatic elements, light moments of tension and lots of sparkling romance. The result of this colourful mix is a very entertaining soap with an extremely high addictive factor.

The fact that this works so well is due to the scriptwriters as well as to the good directors. But also the very well chosen cast contributes a considerable part to the fact that the series always hits the right note. The actors' play always balances perfectly between seriousness and irony, which is credible in the more serious moments and amusing in the more humorous ones. And even though the story seems extremely constructed and the characters are a bit exaggerated, the characters seem real enough to be feverish, joyful or compassionate. In short, it's just fun to watch Jane the Virgin.

In the course of the first season there are here and there some small lengths and qualitative swings downwards. But overall the entertainment level remains at a very high level throughout the 22 episodes. If you like TV entertainment with a twinkle in your eye, if you like to indulge in unrestrained romantic soaps and humorous love stories full of mistakes, intrigues and secrets, this series is for you. Absolutely worth seeing!

Picture + sound: There is hardly anything to criticize about the technical implementation. For a TV production, the visual implementation in terms of overall sharpness, powerful coloring and contrasts is absolutely convincing. Here and there there there are smaller fuzziness, but altogether the small weak points hardly fall appreciably into the weight. The sound, which is not surprising for a series like this, is not spectacular. The dialogues are rather centrally mixed, real surround feeling only comes up very rarely. Nevertheless: for a current TV series, everything is absolutely satisfactory. Good.

Extras: As a bonus there are two short documentaries about the creation of the series (ca. 14:57 min.) and about the actors (ca. 6:53 min.). In addition there are cut scenes to single episodes as well as some amusing missed scenes (ca. 5:55 min.). The box also includes a small booklet with an episode guide to the first season.

Fazit: "Jane the Virgin" is a really amusing and charming mixture of drama, comedy and telenovela, whereby the latter genre is also satirized in a lovable way. An amusing basic tone, a sympathetic main actress and lots of heart make this first season a very tasty food for all serial junkies. The DVD presents the episodes in very harmonious picture and sound quality and also offers a few extras that could have been a bit more extensive, but which will still satisfy all fans of the series. absolutely recommended!