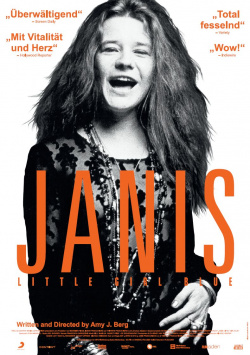 Janis Joplin's career was short, but intense and trend-setting. When the singer with the distinctive rock tube died at the age of only 27, she had already shaped a whole generation. And Janis Joplin is still regarded as an icon of rock music, whose influence can still be heard today. But who was the singer known for her love affairs and excessive drug use? What drove them to write the songs that have become real classics? And what made her so unhappy that despite her success she always had to seek comfort in drugs and alcohol, which ultimately cost her her far too young life? In "Janis: Little Girl Blue" documentary filmmaker Amy J. Berg tries to get to the bottom of the Janis Joplin myth. With the help of numerous interviews with companions, many archive recordings and personal letters from Joplin, she draws a very revealing and intimate portrait of an artist as ingenious as she is complicated.

The film is absolutely worth watching not only for fans of the artist who died far too early. Even if you can't really do much with the music of Janis Joplin, you'll find an extremely exciting and thrilling documentary here. Berg does not only create a picture of the singer with a sensitive hand, which was probably unknown to great admirers in this form. It also immerses the viewer in a world in which music had a completely different meaning socially than it does today. The film is thus a musical and socio-political journey through time that does absolute justice to Janis Joplin's artistic heritage.

It is fascinating to listen to the stories that Joplin's companions have to tell. Together with the no less revealing archive recordings and the very personal letters read out by the singer Cat Power, a picture is created that does not idealize unnecessarily, but that confirms the legend that Joplin is. Anyone who loves her music and who has therefore already dealt with it knows that she was not an easy person and that she had to struggle with her demons. What is new, however, are the many small facets that are revealed here through the stories and letters, as these look even further behind the façade that was previously known.

"Janis: Little Girl Blue" is a sensitive artist's portrait, a declaration of love to a sensitive, but also very strong woman and her music, which even well over four decades after Janis Joplin's death has lost nothing of its power and meaning. A must for all Joplin fans and also generally for lovers of rousing documentaries absolutely worth seeing!