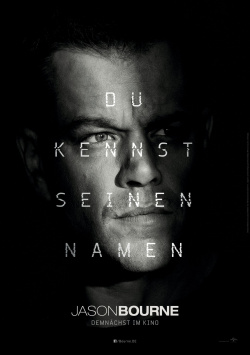 For almost ten years Jason Bourne (Matt Damon) was successfully submerged. But now he has to face his past again. When former CIA agent Nicky Parsons (Julia Stiles) hacks into the CIA's network to steal information about secret programs like Treadstone, of which Bourne was also a part, and make it public, she encounters important secrets from Bourne's former life. But the hack doesn't go unnoticed and quickly the CIA under the leadership of ambitious agent Heather Lee (Alicia Vikander) gets on Parsons heels. The information about the secret programs must not be published under any circumstances and all those who know about them must be eliminated - first of all, of course, Jason Bourne, who after a meeting with Parsons has again come into the crosshairs of his opponents. But of course a perfectly trained human weapon like Jason Bourne can't be stopped that easily…

After a rather disappointing attempt to destroy the "Bourne", it's a very difficult weapon to stop.-In the second series without Jason Bourne alias Matt Damon, Damon and director Paul Greengrass (part 2 + 3) have joined forces again after a nine year break to once again offer fans an intelligent action thriller of the extra class with "Jason Bourne". The participation of screenwriter Christopher Rouse, who had already worked as an editor at Damon's first three appearances as Bourne, was also intended to ensure that this would succeed. Thus, the action of "The Bourne Legacy" is largely ignored and connected to the events of "The Bourne Ultimatum". And even though Jason Bourne can now remember who he is, not all the secrets about the Treadstone project have yet been uncovered.

And this is exactly where the problem of the otherwise very exciting film lies. The story goes more and more in circles, moves too much on safe and well-trodden terrain to still be able to captivate 100%. It would have been desirable if the makers had moved out of the comfort zone and integrated Jason Bourne's really good character into a whole new plot. The Treadstone plot is now really exhausted and doesn't really offer anything surprising despite the new revelations. The first Bourne films were excellent not only for being good action films, but also for being intelligent thrillers. It's a little different with Jason Bourne. Here, the action is clearly in the foreground, while the actual story is degraded to a minor matter.

Due to this: Paul Greengrass has managed to turn the all-too-familiar set pieces into an extremely entertaining conspiracy thriller, in which Matt Damon once again presents himself convincingly as an action hero. The chases through Athens and Las Vegas that lead up to and conclude the film are absolutely great and offer action cinema at a very high level. The more lengthy moments are still absolutely worth seeing thanks to the very good game of Oscar winner Alicia Vikander or a wonderfully intriguing Tommy Lee Jones. And also France's superstar Vincent Cassel is simply great as a merciless hit man who still has a personal bill open with Bourne.

Sure, "Jason Bourne" may not be the best part of the series. But the thrilling directing (apart from the Greengrass-typical nodding camera), the good actors and some really outstanding action scenes save the movie from many of its smaller weaknesses. And the end at least signals the hope that, should things go on, a whole new chapter in the history of Jason Bourne might finally be opened. Absolutely worth seeing, with small concessions!