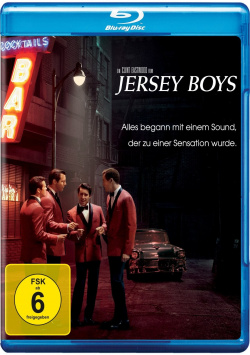 Film: Clint Eastwood is not necessarily someone you would associate with a musical. But in fact "Dirty Harry" has dared to adapt the award-winning musical play "Jersey Boys" with his latest directorial work. It tells the story of the legendary pop group The Four Seasons around singer Frankie Valli (John Lloyd Young). Four young men from simple backgrounds join forces in New Jersey to make big money with their music. The unique voice of Frankie and the great talent of songwriter Bob Gaudio (Erich Bergen) should be enough to bring the hoped for success. But unfortunately it's not so easy in the hard music business. After the band had to make do with ungrateful jobs as background singers for over a year, they put everything on one card. With borrowed money and new compositions in their luggage, they buy themselves a studio session that marks the beginning of a world career that has produced immortal hits like "Sherry", "Big Girls don't cry" or "Walk like a Man". But success is not automatically accompanied by great happiness. While Frankie's marriage increasingly suffers from the extended tours, the connection within the band also crumbles more and more, especially due to the moods of Frankie's youth friend Tommy DeVito (Vincent Piazza). When it comes out that Tommy has high debts and also made use of the band's money, the end of the Four Seasons doesn't seem to stop any more...

"Jersey Boys" is less a musical than a very musical biopic. As such it strictly follows the rules of this genre, but still stands out from other works like "Ray" or "Walk the Line" for several reasons. You can see in the film that Clint Eastwood, as well as his screenwriters Marshall Brickman and Rick Elice, the authors of the acclaimed Tony Award winning stage version, the music, the time and the very own world of New Jersey wanted to create a loving monument. Surely there is such a passion in other biopics as well, but only rarely does it become as obvious as it is here.

Eastwood's film can also benefit from the decision to cast many roles with the actors they have already played on Broadway. One notices that the actors are closely connected to these characters and can disappear completely behind them. John Lloyd Young, for instance, never looks like he's just playing Frankie Valli. Especially in the scenes, in which he is allowed to perform the hits of the Four Seasons, he really becomes Valli and takes the viewer back to the wild sixties, at least for a short time. The good equipment and some as such not recognizable visual effects support this impression even more.

Dramaturgically "Jersey Boys" is a bit conventional. But just the decision to let some of the protagonists speak directly to the audience as narrators again and again gives the story a special touch, from which at least some of the more tenacious moments can profit. This is quite helpful with a running time of over two hours, because even the stirring music and an outstanding director like Clint Eastwood can't prevent it from getting to shorter lengths here and there. But especially those viewers, who like such biopics and especially love the music of the Four Seasons, will hardly notice them disturbingly.

A first-class camera work, perfectly staged music interludes, an excellent cast (Christopher Walken is simply wonderful as gangster Gyp DeCarlo) and of course the great soundtrack make sure that the Broadway success was convincingly transported from the stage to the screen. If you love music films in general and the music of the 60s in particular, you should not miss this charming and stirring biopic. Absolutely worth seeing!

Picture + Sound: The coloration of the film seems a little artificial. But the look, dominated by warm brown tones, builds up the right 50s and 60s feeling very well. The picture sharpness is on a very high level and also the contrast tuning can convince completely. The German sound is available as a decent Dolby Digital 5.1 mix, which only has a few small weaknesses in comparison to the much more lively English DTS-HD MA mix. But since the voices and above all the music are transported powerfully from the loudspeakers, there is no real reason to complain here either. All in all this is enough for a more than satisfied one: Gut!

Extras: As a bonus there is a good Making of (ca. 22:57 min.), which traces the way of the "Jersey Boys" from Broadway to the cinema. In "Too good to be true" (ca. 4:51 min.) actor Donnie Kehr talks about his work on both versions of the story, as well as the role of the Mafia in the career of the Four Seasons. And finally "Oh what a night" (ca. 5:05 min.) takes a look at the creation of the beautiful final sequence. In this feature, viewers can even enjoy a short taste of a dancing Clint Eastwood! Not much additional material, but absolutely worth seeing!

Fazit: "Jersey Boys" is a successful film adaptation of the Broadway success of the same name, in which the good actors, the first-class camera work and, of course, the musical interludes compensate for some small lengths. So the biopic about Frankie Valley and the Four Seasons, staged by Clint Eastwood, is absolutely worth seeing for everyone who loves music films in general and the music of the 60s in particular. The Blu-ray presents the film in good picture and sound quality and also has three worth seeing features on board. Recommended