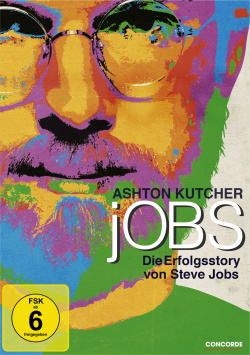 Content: When Steve Jobs introduced the iPod in 2001, it was the beginning of a new digital age and the great triumph of Apple. But the road to this success was not always easy for Jobs and his team. "jOBS" traces the career of the Apple founder in a classic biopic manner. Starting with the iPod presentation, it then goes right back to the beginnings when Jobs (Ashton Kutcher) at College is still looking for a goal for his future. While he was working for Atari two years later, one thing became clear to him: he needed his independence in order to implement his ideas. Together with his buddy Steve Wozniak (Josh Gad), he founds Apple Computers and takes care of the first orders from the garage of his parents' house. After many setbacks, the Apple II can be developed with the financial support of Mike Markkula (Dermot Mulroney). And this is also where the company's success story begins. But with success come new problems. Steve is investing more and more money in his vision, which is not welcomed by the board. And since reason and cooperation are not his strong points, Steve Jobs is finally released from his own company after a few financial failures. But that's by no means the end of his story...

"jOBS" is a quite well done and entertaining biopic, which however follows the rules of this genre too unimaginatively. Begin with an incisive chapter in the life of the person portrayed, from which one then looks back into his past. That's already so worn out that it's almost involuntarily funny - not least because of the wonderful way this stylistic device was pulled through the cocoa in the biopic parody "Dewey Cox". Also the fact that many events can only be touched, because in 100 minutes almost thirty years are dealt with and thereby a certain superficiality develops, belongs to the usual problems of such knitted biopics. Nevertheless: the high level of criticism that the film has just been subjected to in the USA doesn't deserve "jOBS".

Surely, unlike Jamie Foxx in "Ray" or Helen Mirren in "The Queen", Ashton Kutcher never manages to disappear behind his role. He does not become Steve Jobs, but always remains Ashton Kutcher, who is visibly trying to play the Apple visionary. His ability is simply not enough for more. This prevents a special acting impression from being created here. But it doesn't ruin the movie completely. Because not only are the other actors really good. Joshua Michael Stern's staging is also entertaining and quite captivating, so that the viewer is well entertained. The fact that a more critical view of Steve Jobs and Apple would have done the whole thing good cannot be denied. But as a pure entertainment film, inspired only by the life of Steve Jobs and the success story of Apple, the whole thing works really well.

Although clothes, hairstyles and equipment have been realized very authentically, the viewer should not cling too much to the facts presented here. Because this biopic - not uncommon for dramatized life stories - takes a lot of liberties to make the story even more exciting for the audience. So anyone who expects a biography with a documentary claim will have little to gain from "jOBS". But for those who appreciate classically knitted biopics, want to be entertained and at least want to get a little insight into the life of a visionary, this movie can be warmly recommended, despite some minor weaknesses. Worth seeing!

Picture + sound: Not only the equipment and hairstyles, but also the colour scheme make sure that the 70s look of the film is very convincing. In addition to the colours, the picture of the DVD can also convince with a good sharpness of detail and well tuned contrasts. The German soundtrack is available both as Dolby Digital 5.1 and as a DTS mix. Both tracks sound rather unspectacular - not surprising for a dialogue-heavy biopic - as the rather frontally mixed voices clearly set the tone here. However, smaller sound effects and ambient noises together with the soundtrack ensure that the surround speakers are also used to some extent. Good!

Fazit: "jOBS" was torn apart by criticism especially in the USA and was only able to regain his anyway not very high budget by a narrow margin. But even though Ashton Kutcher may not be the ideal cast for the role of Steve Jobs, the film is far better than its reputation. With a more critical approach and a bit more depth "jOBS" could have become even more than the solid entertainment movie it is. If you like entertaining biopics and are at least interested in the surface of Apple history, you can't go wrong with this DVD. The technical implementation is coherent, the bonus material okay, but somewhat promolastic. Altogether there is a satisfied one for this home cinema premiere: Recommendable!