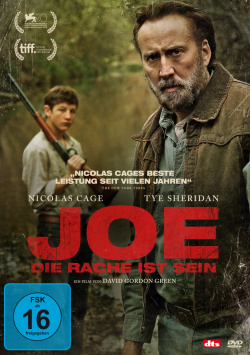 Joe - The revenge is his - DVD

Film: After a longer stay in prison Joe (Nicholas Cage) got his life under control again. Through hard work he made it to the head of a group of forest workers. Despite the poor economic situation and the lack of prospects everywhere in the region, Joe tries to get the best out of himself and his employees. The same goes for 15-year-old Gary Jones (Ty Sheridan), who impresses Joe with his uncompromising zeal. Joe quickly develops paternal feelings for the boy and he wants to give him the chance for a better life that he and the other adults in the area no longer have. But when he has to watch Gary's alcohol-addicted father (Gary Poulter) destroy this chance with beatings and humiliations, Joe has to fight hard against losing control over himself again - a fight he soon loses...

Director David Gordon Green is always good for a surprise. After some smaller movies like "All the Real Girls" he made his breakthrough in 2008 with the pothead comedy "Ananas Express". Two qualitatively rather disappointing comedies followed, before he could inspire the critics and the audience with the tragicomedy "Prince Avalance" in 2013. This indie pearl is now followed by the drama "Joe - revenge is his", which could not be further away from works like the "Pineapple Express". Pervaded by an oppressive sadness, Green here draws a very authentic picture of life in the country in the south of the USA. By casting some roles not with actors, but with real residents of the area in which he filmed, this closeness to reality is underlined. Green also takes a lot of time to show everyday things like the working process of Joe's troupe.

The very slow pace that results and also the gloomy mood make this film almost completely elude the usual viewing habits of the audience. "Joe - Revenge is His" already shows in its first minutes that it isn't a feel-good movie, that there won't be any entertainment in the classic sense here. You have to be able to get involved with the very unwieldy staging in order not to perceive what will ultimately prove to be the great strength of the drama as unbearable boredom. However, if you face Green's idiosyncratic narrative style and don't let the general hopelessness that prevails in the story pull you down completely, you'll get a really outstanding film here, which doesn't just leave a lasting dramatic impression.

"Joe - Revenge is His" is also absolutely first class in acting. Especially positive is the fact that the often so scolded Nicholas Cage can finally prove again why he won an Oscar years ago. At his side, young Tye Sheridan delivers an equally impressive performance. After the 18 year old up-and-coming actor could already inspire McConaughey at Matthew's side in the drama "Mud", he now proves his great talent again. For the role of the alcohol-addicted father, Green took a performer off the street in the truest sense of the word. Actually, Gary Poulter was only supposed to play a small supporting role, but Green was so impressed by the man's talent that he gave him this important role without further ado. Unfortunately, Poulter did not experience the good reviews he received for it any more. He died only a short time after the end of shooting at the age of 53.

There are some scenes in the film that are hardly bearable. For example, a sequence in which Joe finds out what Gary's sister should be forced to do by her father is not only extremely disturbing, but also very angry. And the fact that it's actually clear from the beginning that there can't be a happy end in the classical sense here, puts additional pressure on the mood of the audience. Sure, in the end, there's a little glimmer of hope. Nevertheless, the drama as a whole is extremely heavy food, which you still have to nibble at long after the end of the movie. That also makes it so difficult to recommend the film to others. Because why should you want to watch a movie that makes you feel bad most of the time and leaves you extremely frustrated?

The reason why it's worth it are the excellent actors, the really good staging and the very moving story. Sure, that's not really something for the broad mass taste. But if you appreciate American independent cinema, like authentic dramas and like to face cineastic challenges, you shouldn't miss this heavy but really good movie. Absolutely worth seeing!

Picture + Sound: The DVD image captures the movie's dreary atmosphere perfectly. The reduced colour scheme, the high picture sharpness and the balanced contrasts ensure that the viewer is drawn directly into the action. The German sound is available both as an atmospheric Dolby Digital 5.1 mix and as a somewhat more powerful DTS track. But there are rarely really powerful surround moments. In fact, harmoniously converted ambient noises, smaller sound effects and the good coordination of dialogues and music provide an effective sound carpet. Gut!

Extras: For the DVD director David Gordon Green together with producer David Wingo and supporting actor Brian Mays recorded an interesting audio commentary, which is however offered without subtitle options. The rather extreme southern accent of Brian Mays therefore makes it difficult even for interested viewers with a good command of English to follow the entertainment.

Besides the commentary there is also a proper promo-making of (approx. 10:47 min.), as well as a featurette that deals with the making of the film and the book presentation (approx. 15:16 min.). Two cut scenes (approx. 2:34 min.) and the trailer round off the additional offer.

Fazit: "Joe - Revenge is his" is extremely heavy food. David Gordon Green has staged a sad, somewhat unwieldy but nevertheless gripping southern drama, which is carried by an extremely strong Nicholas Cage. No film for a relaxed DVD evening, but if you appreciate challenging independent cinema, you should definitely take a look here. The DVD presents the film in good picture and sound quality and also has short but worth seeing bonus material to offer. Recommended