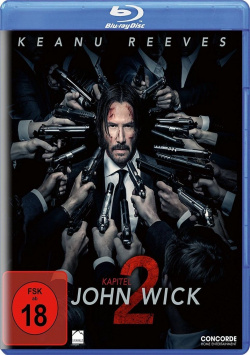 Film: John Wick (Keanu Reeves) is back! After avenging his dog's death, the hit man retrieves his beloved 1969 Mustang from the Russian gangsters. Now he can finally go back to retirement, from which he was forcibly torn. But as soon as he has buried his weapons again, the Italian gangster Santino D`Antonio (Riccardo Scamarcio) shows up to claim an old debt. When Wick refuses, the gangster makes it clear to him in a truly explosive way that this is impossible. And so John Wick reluctantly agrees to kill D'Antonio's sister Gianna (Claudia Gerini) in Rome. But D'Antonio wants to eliminate any trace through which the death of Gianna could be traced back to him. And so Wick is suddenly the target of contract killers who leave no stone unturned to kill him. Time for him to show why he was once regarded as the best hit man in the world…

With "John Wick: Chapter 2", the long-awaited sequel to the 2015 surprise hit came to our cinemas and even surpassed the success of the debut. Once again, the former stuntman Chad Stahelski has taken over the direction. This time, too, he has attached great importance to the fact that the stunts and the fights are all real and - with the exception of all the blood - no CGI effects are used. Again he sends Keanu Reeves, acting stoically in a suitable way, on a bloody mission to the underworld - this time not only from New York, but also from Rome. The secret world that was sketched in the first part is expanded a lot further, which prevents the sequel from being just a copy of the first movie. Rather, the story is consistently led by pus and whipped to a dramatic turning point, which makes very great desire for a third part, where nothing would be as it was before.

The action and the fighting sequences are first class again this time. Admittedly, with the countless head shots that Wick hands out here, there will be some signs of fatigue at some point. Also missing is the surprise effect that Part 1 came up with. At that time, you just hadn't expected such an uncompromising and entertaining action-pack. There is, of course, a certain expectation with regard to "Chapter 2", which may be too high for some viewers to be fulfilled.

No question, Stahelski has once again staged a stylish and extremely entertaining action film with some dry humor and lots of handmade action. The fact that he overshoots the mark in some scenes is absolutely bearable in view of the many successful moments - from the first chase in Wick's 69 Mustang to a fight in the mirror maze. And the final, which shuffles the cards in a completely new way, is so successful that one likes to overlook some lengths anyway. Therefore, if you liked Keanu Reeves in his new parade role the first time, you will be entertained extremely well again. A solid action strip from the old school - that's what it's all about: Absolutely worth seeing!

Picture + sound: The colour of the film is perfectly matched to the scenery. The overall sharpness is on a very high level, whereby even in dark scenes the detail display can convince. The DTS HD Master Audio 7.1 Mix is extremely powerful, with the main emphasis on action scenes. This is where the bullets really fly around your ears. Very good.

Extras: In addition to an informative audio commentary by director Chad Stahelski and Keanu Reeves, the Blu-ray also offers three cancelled scenes (approx. 8:09 min.) and 10 featurettes with a total running time of 64 minutes. The short documentaries deal with the success of the first film, the training of the actors, the camera work, the stunts, the action, the complex criminal world or the great car chase at the beginning of the film. In the end it becomes very amusing to count how many corpses pave John Wick's way and when a trailer shows what part 1 would have looked like if John Wick had not avenged his dog but John Wick's dog.

Fazit: "John Wick: Chapter 2" is a very entertaining action movie of the old school. Even though the surprise effect of the first part is missing and some moments are really overdrawn, the movie is still a lot of fun. The Blu-ray convinces with a good audiovisual realization of the film and also has about 70 minutes of worthwhile extras on board. But there is a clear one: Absolutely recommendable!