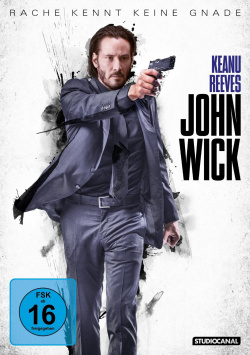 Film: John Wick (Keanu Reeves), once the best hitman in the business, has actually retired from the business to lead a quiet life with his wife Helen. But now she has died and all he has left of his great love is a little dog. A last gift from Helen, which should always remind him of her and help him to cope with his loss. But he doesn't have time when psychopathic gangster Iosef Tarasov (Alfie Allen) kills the dog after John refuses to sell him his beloved 1969 boss Mustang. Now John is thinking of revenge. He starts a bloody search for his car and for Iosef, the only son of John's former partner, the Russian gangster boss Viggo Tarasov (Michael Nyqvist). Of course, he wants to protect his son's life and therefore puts the best New York killers on John. But not without reason John Wick's reputation is legendary - and so it doesn't take long until the streets of the city turn blood red on his merciless revenge campaign...

The two experienced stuntmen Chad Stahelski and David Leitch now dare to venture behind the camera with their company 87Eleven. Their first production is the action hit "John Wick" with Keanu Reeves, with whom they already worked on the two "Matrix" sequels. Derek Kolstad's script, which they chose for their debut as filmmakers, actually offers very conventional B-movie food. It's full of clichéd characters and flat dialogues and therefore shouldn't really work out. But Stahelski and Leitch managed the seemingly impossible and conjured up an extremely cool thriller out of the very simple basic structure, which gave Keanu Reeves his long-awaited comeback.

This succeeded because the directors concentrated on what they do best: staging first-class action with breathtaking stunts. Moreover, as second-unit directors in films like "Das Bourne Vermächtnis" or "Tributen von Panem", they learned how to make this action look good visually. Here, they bring a fascinatingly dark image of the New York underworld to the canvas, which is both stylish and threatening at the same time. In the resulting atmosphere they let it crack really nice and pull out all the stops of their skills. This may not be quite as mercilessly painful to watch as in the two great "The Raid" films, but without a doubt it plays in the same league.

That the acting achievements are degraded to a minor matter should not really surprise anyone. But although characters like the Russian mafiosi Tarasov or the ice-cold killer Miss Perkins (Adrianne Palicki) are not exactly a spawn of originality, the actors leave a consistently positive impression. Their game is either seasoned with refreshing self-irony (Willem Dafoe, Ian McShane) or reduced to the essentials (Keanu Reeves), so that the high fun factor of the action is only supported by it.

Sicherlich, "John Wick" is not a particularly intelligent film, not a demanding brain food. But it's a refreshingly uncompromising, adult action flick that ignites a firework of stunts and martial arts without much special effects, stylizing the thin story into a thrilling vendetta. So if you appreciate action of a more tangible kind and like movies like "The Raid", you shouldn't miss "John Wick". Absolutely worth seeing!

Picture + sound: The picture of the DVD captivates by a high picture sharpness, which lets also many smaller details come to the fore very well. The colouring is very atmospheric, dirt or other visible weaknesses are not recognizable. The sound shows its strengths especially in the action sequences. In addition to the well mixed dialogues, sound effects such as shots, explosions or squeaky car tires provide powerful movement in the surround range. Good!

Fazit: "John Wick" may not get prizes for originality or profound dialogues. But as a pure action film the directing debut of the two professional stuntmen Chad Stahelski and David Leitch really offers great entertainment. The surprise success, whose continuation is already planned, is a refreshingly uncompromising, adult action flick that ignites a firework of stunts and martial arts without much special effects and thereby stylizes the thin story into a thrilling revenge campaign. On the DVD the whole thing is presented in atmospheric picture and sound quality, accompanied by some good extras. There can only be one conclusion to this: absolutely recommended!