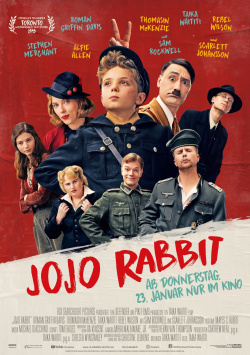 In the Germany of the Second World War, little Jojo (Roman Griffin Davis) would love to be a really good Nazi. But unfortunately Jojo is a rabbit's foot and a klutz. For example, his attempt to throw a grenade goes very badly wrong. At least his imaginary friend Adolf Hitler (Taika Waititi) stands by his side even in such difficult situations and gives him the necessary motivation not to give up. But then Jojo's attitude is put to the test when he finds out that his single mother (Scarlett Johansson) is hiding a Jewish girl (Thomasin McKenzie) in her attic. Jojo knows what happens if he betrays the girl - and he would never do that to his mother. And so he begins to spend more and more time with the Jewish girl, turning the views he has been hammered with over the years upside down…

With "Jojo Rabbit" Taika Waititi ("Thor: Day of Decision") creates a little trick. His satire is hilarious in a moment, only to hit you in the stomach with full force and bring tears to your eyes. This is a feat because, despite the completely contrasting keys, the end result is a harmonious overall work. Even when the movie allows itself to be wonderfully silly at times, it never gets flattened, but always keeps a certain charm and a clever subtlety. In this way the humorous moments certainly prepare the dramatic scenes, so that no disharmony arises.

It is also to be credited to Waititi that he works very subtly in the important moments. This is especially true for a scene that less talented filmmakers would have definitely exploited emotionally. With Waititi, however, simply tying shoes is enough to hit the audience right in the heart. Apart from the excellent directing of the New Zealander, the playing of the great ensemble also has a very positive effect. Roman Griffin Davis is a true new discovery and Scarlett Johansson, as his mother, delivers one of the best performances of her career to date. But also Sam Rockwell is (once again) great, as well as Waititi himself, who appears as the imaginary Adolf Hitler.

There are a few moments in "Jojo Rabbit" that don't work out so well. But such small slips are almost immediately ironed out again. Taika Waititi humorously creates a poignant plea against hatred, prejudice and racism and for a life that is only really worth living when we stop fighting each other because of our origins, our religion or our political views. The fact that this message is conveyed in an entertaining way and without the so often used club of dismay makes this film at the end: absolutely worth seeing!