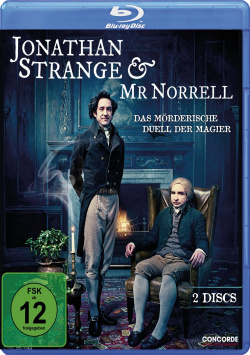 Film: There have been no active magicians in England for over 300 years. Magic is practiced only in theory by a few so-called gentlemen wizards. But the young Mr. Segundus (Edward Hogg) wants to bring magic back to England. For according to a prophecy, this is to be done by two magicians. He himself is not one of them, but he sets out in search of the men who will help the magic to its old glory and prestige. Segundus finds the first one in Mr. Norrell (Eddie Marsan). He has bought up every magic book in the country and learned magic with great difficulty over decades. The second is Jonathan Strange (Bertie Carvel), who discovers his talent for magic after meeting the mysterious vagrant Vinculus (Paul Kaye). Together, Strange and Norrell could achieve great things. But to live up to his reputation, Norrell has made a pact with the dark side of magic in the form of a mysterious elf servant (Marc Warren). And this pact now takes its toll…

"Jonathan Strange & Mr. Norrell" is the TV adaptation of Susanna Clarke's award-winning novel. Playing in an alternative version of England during the Napoleonic Wars, the story fascinates with a mixture of historical events and fantasy elements. The playwright Peter Harness rewrote the novel for television and the 7-part mini-series was directed by the experienced TV director Toby Haynes, who already sat on the director's chair in "Sherlock" or "Doctor Who". With Eddie Marsan ("Sherlock Holmes", "Ray Donovan"), Bertie Carvel ("Les Miserables"), Marc Warren ("Mad Dogs", "The Musketeers") or Alice Englert ("Beautiful Creatures") the filming is also very well cast.

But what the series can really benefit from are the atmospheric features, the rousing camera work and the special effects that are really good for a television production, which literally lend the story something magical. The first episode also features a pleasant pinch of British humor, which makes for a mix that is especially worth seeing. However, the lightness that emerges despite some dark moments at the beginning is almost completely lost in the course of the seven episodes. The story gets darker and darker and more and more confusing, which has a little negative effect on the entertainment value. Especially the last two episodes are still something for the eye, but aren't as much fun as the first episodes.

Nevertheless: even though the ending can't quite keep what the beginning promises, "Jonathan Strange & Mr. Norrell" as a whole is first class TV entertainment for all fans of solid fantasy material. Told in an exciting way, elegantly staged and very well played, the series lets you dive into a world full of magic, of which you want to see even more at the end. (Even though the story itself is closed, the finale makes a sequel almost imperative.) And there is a very clear one for that: Absolutely worth seeing!!!

Picture + sound: A high picture sharpness, an atmospheric colouring and harmonious contrasts make the absolutely clean picture of the Blu-ray a real pleasure. Especially in the scenes where magic is used, the sound has some very nice sound effects to offer, which come into their own in the DTS-HD Master Audio 5.1 Mix. Overall, both the image and the sound help to capture the very special atmosphere of this series. Good!

Extras: Unfortunately the quite extensive bonus material of the British box did not make it to Germany. In this country no extras are offered to the spectator. In view of the fact that additional material such as Making of, Outtakes etc. was produced, this is really extremely disappointing.

Fazit: "Jonathan Strange & Mr. Norrell" is an exciting and very entertaining fantasy mini-series, which can score with an exciting story, a pinch of dry humor, good effects and interesting characters. An entertaining magician adventure that screams for a sequel! The Blu-ray Box of the Mini series is technically very well implemented. Only the lack of extras smells like a lazy spell. But all in all the spectators are offered seven exciting and very entertaining hours with a high show value. And for that there is a very clear one: Absolutely recommendable!