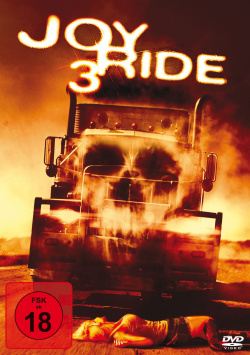 Content: "Rusty Nail" is back! The killer trucker (Ken Kirzinger) is now for the third time taking on everyone who gets in his way. After just brutally killing a junkie couple, he meets the troop around the young racing driver Jordan (Jesse Hutch) on the infamous Highway 17. When Jordan's buddy Austin cuts Rusty Nail's truck during an overtaking manoeuvre, the serial killer knows who his next victims will be. And so a bloody fight for survival begins for Jordan and his friends, in which even the police and Jordan's racing skills cannot help them...

"Joy Ride" by John Dahl from 2001 was not only a successful thriller, but also the beginning of a great career for two stars. Both the much too early deceased leading actor Paul Walker and screenwriter J.J. Abrams, meanwhile promoted to "Star Wars" director, could show after this thriller very favorably received by critics and audience several great successes. The fact that the actors and doers of the second sequel will succeed in doing the same can rightly be doubted. Neither does the script reveal any particular refinement, nor do the actors deliver any great performances. And yet "Joy Ride 3" is a lot of fun, especially compared to its rather messed up predecessor.

Director Declan O`Brien had already snatched a popular horror franchise with his Direct-to-DVD sequels to the cinema surprise hit "Wrong Turn". The result was once very entertaining, then again underground bad. This is why O'Brien does not necessarily enjoy the best reputation among genre fans. Surely, even "Joy Ride 3", realized with a mini-budget on only twenty days of shooting, doesn't really revolutionize the genre and has some dramaturgical weaknesses. But O'Brien has staged his attempt to "pimp up" classical slasher horror with light "Fast 6 Furious" elements, with much visible joy to macabre humor and passion for the genre. And that makes this third road trip with Highway butcher Rusty Nail very entertaining despite some criticisms.

Continuing from an evil opening sequence, in which Rusty Nail proves his creativity by turning his truck into a killing machine, to an explosive finale at a scrap yard, the film offers tempo, some suspense, a good portion of black humor and a whole series of successful slasher moments - everything the inclined genre fan wants to see. Who needs a sophisticated character drawing or clever dialogues? If you don't take the whole thing too seriously and just want to see a technically solid, very entertaining horror thriller, you can confidently go on this bloody road trip along Highway 17, also known as "Death Road". Worth seeing!

Picture + sound: The picture on the DVD is absolutely clean and has a very good overall sharpness, especially in the bright outdoor shots, which shows hardly any loss of quality even in the darker scenes. The colours are powerfully mixed and the contrasts are also well balanced. The Dolby Digital 5.1 Mix looks a bit weak in the dialogue sequences. But this impression changes at the latest in the pleasantly lively action sequences, in which not only roaring motors provide a good surround feeling. Good!

Extras: The DVD has lots of neat and sometimes very entertaining extras to offer. It starts with an audio commentary by director Declan O'Brien and Brett Levinsohn, who was involved in the making of the film. This commentary is a prime example of a successful audio commentary: entertaining, self-ironic, informative and very charming, O'Brien reveals here an obvious love for his work, whereby he is also always aware that he does not stage great cinema art.

Besides the good commentary, the DVD also has a nice making of (approx. 11:24 min.), as well as a four-part directing diary (approx. 8:59 min.) to offer. In the pre-visualization sequences "played" with model cars (approx. 6:40 min.), which are usually created on the computer, O'Brien again proves his very special humor and at the same time makes clear how elaborate the chases for a low budget production like this have been. There are also three edited scenes (approx. 5:37 min.), as well as a message from Jewel (approx. 1:17 min.), which strictly speaking also belongs to the edited scenes. Finally, there is a short featurette about "Casting von Large Marge" (ca. 3:45 min.), the director's little reminiscence of "Pe-Wees irre Abenteuer". For a small production a pleasantly extensive bonus package that really has some small highlights to offer. Good!

Result: "Joy Ride 3" should not be so much fun as a direct-to-DVD sequel, which was produced with a mini budget on only twenty days of shooting. But director Declan O'Brien, who has not only made friends with horror fans with his "Wrong Turn" sequels, has staged a very entertaining genre contribution with his mix of horror and "Fast & Furious" action, which can convince with solid slasher scenes, rapid chases and a pinch of self-irony. No milestone of the modern horror film, but in any case a very entertaining home cinema premiere that presents itself in good picture and sound quality and also has some good extras to offer. But there is a very clear one: Recommendable!