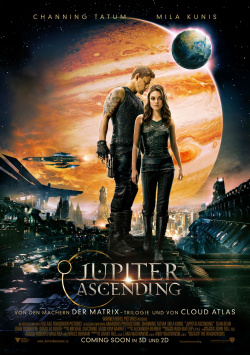 Jupiter Jones (Mila Kunis), the daughter of Russian immigrants, hates her life. Day in, day out, she has to clean the apartments of the Chicago upper class, before she returns exhausted to her small room in the evening, which she shares with her mother (Maria Doyle Kennedy) and her aunt. But as frustrating as her sad everyday life may be, she soon longs for it back. Because when she wants to sell some of her eggs to make money, she is almost killed in the clinic by strange creatures. In the last second you save the mysterious Caine (Channing Tatum) life. Now the young woman is in the midst of an intergalactic war in which she seems to play a central role. For allegedly, because of her genetic heritage, she is entitled to take up an incredible inheritance which some powerful rulers want to dispute at any price. And so she has to fight in foreign worlds not only for her own life, but for that of every single person on earth and follow a calling that has been predestined for her all her life…

With "Jupiter Ascending" the brothers Andy and Lana Wachowski return to the genre they once revolutionized with their "Matrix" trilogy. Her latest work is again a visually impressive science fiction fairy tale with more or less hidden socio-critical undertones. Once again, the focus is on a perfectly normal person who turns out to be the chosen one in an essential battle between good and evil. But a new revolution of the genre should rather not be expected here. Jupiter Ascending" is certainly entertaining. But besides a few moments of wonderful self-irony and some great effects, there are also several moments of involuntary comedy and eccentric effort, which make you leave the cinema with a very ambivalent feeling.

Whenever the action is in the foreground, the entertainment value rises noticeably. However, during longer purely dramaturgical scenes it becomes clear again and again that the Wachowskis concentrate too much on dazzling costumes or the most eccentric look of the aliens and thus lost track of the actual story. Otherwise the terrible dialogues ("bees don't lie") and the unfinished elaboration of good ideas can hardly be explained. The fact that this is actually a rather unoriginal story, but at the same time it's a cramped attempt to be different, results in a very unharmonious overall picture, in which intention and result are very far apart.

However, this doesn't make "Jupiter Ascending" a bad movie for a long time. The show values are very high in many moments and there are enough scenes in which this colorful science fiction opera is really a lot of fun. But as it becomes clear just in such moments, there is a feeling of disappointment beside the pleasure. Because somehow they had hoped that the Wachowskis would finally get their act together with this fantasy adventure after some flops. But the film does not make the unspeakable "Speed Racer" so completely forget.

The actors deliver average to good performances. Channing Tatum is a mixture of man and dog and is reduced to doing fast-paced action with naked upper body. Also Mila Kunis can only look pretty in pretty costumes, while Sean Bean and Eddie Redmayne can at least show a touch of really good acting. This exaggerates Redmayne so much in some scenes, that they want to deny him his deserved Oscar nomination for "The Discovery of Infinity" again. Altogether nobody leaves a really lasting impression here - neither in a positive nor in a negative way.

Whoever is simply looking for a colourful effects spectacle for the eye and likes more unusual designs such as elephant aliens or extraterrestrial ladies with huge ears, will definitely have a lot of fun here. But if you're hoping for a really good and surprising genre contribution on the level of the first part of "Matrix", you'll experience an involuntarily funny miracle of a disappointing kind in "Jupiter Ascending". Therefore: neither really good, nor grottig bad and therefore with some exceptions quite worth seeing!