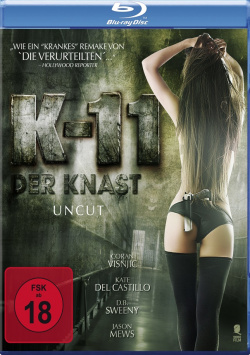 Content: After allegedly killing a rock star who is said to have had an affair with his wife, successful music producer Raymond Saxx (Goran Visnjic) comes to Los Angeles County Prison K-11. This department is actually reserved for homosexuals, junkies and child molesters. The transsexual Mousey (Kate del Castillo) rules K-11 with a hard hand, controlling the drug trade as well as the supervisor Sgt. Johnson (D.B. Sweeney). Raymond doesn't realize that he should subordinate himself to anyone here, which should put him on Mousey's hit list. But in time he realizes that he has to play by the rules of the prison if he wants to prove his innocence and not rot in K-11. And so he devises a plan that is not only supposed to bring him freedom, but could also mix up the power structure in K-11...

With "K-11 - Der Knast" the Australian-born Jules Stewart, mother of "Twilight"-star Kristen Stewart, makes an ambitious directing debut. Stewart, who has worked as a script supervisor for film and TV so far, manages very well to create an extremely oppressive prison atmosphere and to establish the highly interesting scenario of a parallel society within the prison walls. However, at the latest with the first appearance of the corrupt Stg. Johnson a great weakness of the production becomes apparent. With his drug addiction and sexual obsession with Mousey, this character is so exaggerated that he almost looks like a caricature. And even later there are situations or exaggerated portrayals that don't make it quite clear whether the film wants to be a dirty, dark satire here and there or whether everything is really meant seriously here.

On the other hand there are moments of extreme brutality. Especially the storyline around the young transsexual Butterfly (Portia Doubleday) has some almost unbearable moments to offer. The result is a rather unbalanced overall picture, which would have had to be much more determined and relentless in order to reach the class of the award-winning HBO series "Oz". The initial idea and the basic atmosphere are right, the rest would simply have been a little less more. Thus, the actors are all good in themselves, but Stewart would have had to rein in some moments. Had D.B. Sweeney created his character a little more subtly, he could have left a similar impression to Doug Hutchinson's Percy Wetmore in "The Green Mile". The fact that Stewart gives away such potential is really a pity.

Always the story is interesting enough to offer exciting entertainment to lovers of prison thrillers of a different kind. If you can overlook the somewhat indecisive tone of the staging and some scenes that are too strikingly implemented, you will get an exciting and atmospheric implementation of an interesting concept. And despite some weaknesses, there is still one thing to be said for: worth seeing!

Picture + Sound: The Blu-ray image is clean and has high detail sharpness even in darker sequences. The colour scheme appears a little undercooled, which gives a good impression of the dreary prison atmosphere. The sound makes only limited use of the possibilities of a DTS-HD MA 7.1 mix. The dialogues sound quite front-heavy and recognizable surround effects are only used very occasionally. Nevertheless, the overall package is enough for a satisfied one: Good!

Extras: As a bonus, the Blu-ray only offers the trailer and other program tips from the provider.

Conclusion: "K-11 - Der Knast" is a dark prison thriller, which in some moments oscillates between exaggerated satire and brutal drama. But what Jules Stewart does well with her debut as a director is the construction of an extremely oppressive and therefore thrilling atmosphere, in which the main actor Goran Visnjic ("Emergency Room") can deliver a really good performance. At the end, the whole thing isn't quite as authentic and uncompromising as the great prison series "OZ", but still a quite gripping implementation of an exciting and interesting concept. Recommended!