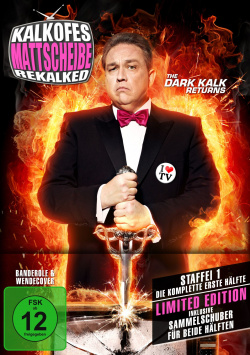 Contents: He's back! Since he commented on the everyday TV madness in a biting, ironic and very unerring way on premiere between 1994 and 1998 in the satire series once started as a radio format, "Kalkofes Mattscheibe" has been an absolute cult. Oliver Kalkofe's very special way of scrutinizing the TV content with wonderfully vicious parodies and politically incorrect comments has annoyed many a "star" and doer, but always makes the fans laugh again and again. After the end of its premiere, the "Mattscheibe" found a new home on ProSieben in 2003. But 2008 was again the end of the story. Fans of the format now had to console themselves with various DVD or CD releases and occasional Internet videos. But since 2012, "Germany's TV critic Pope God No. 1" finally back again to practice media criticism of a very special kind again in "Kalkofes Mattscheibe REKALKED".

Since in a time in which TV is dominated by scripted reality formats, astro shows, Z-promises and casting shows, the world simply needs an Oliver Kalkofe who exposes the whole trash as what it really is. Whether as Harald Glöckler, Costa Cordalis, Astro TV presenters Lorelei and Luke, as Bettina and Christian Wulff or simply as Oliver Kalkofe, when the "media terminator" starts, no eye remains dry. Whether he comments on Bauer Heinrich's "Schäferlied" from "Bauer sucht Frau", takes a close look at the "Bachelor" and the ladies courting his favour, wonders how a format like "We love Loret" could make it onto television, or whoever buys gruesome Schlager CDs on QVC, he speaks in his shamelessly open manner from the souls of many a viewer.

The advertisements for Apotheken-Rundschau or Carglass, RTL II reports on nude campers, the Markus Lanz interview with Helmut Berger, the "Kinderstunde" on the Christian channel K-TV or a RTL revelation report on the question of whether women can suffocate men with their breasts are not spared by Kalkofe's sharp-tongued media criticism.

Of course, Oliver Kalkofe could be accused that his very open words, which often go below the belt, superficially serve a rather low level. But behind the dirty facade there is not only damn honest, but also very intelligent media criticism, which is extremely revealing because of the very direct language. And let's be honest: the way in which "low-noise" bed linen is sold on shopping channels, Karma consultations offered on AstroTV or advertising for things like the "Babyname-Generator" is advertised on Viva simply can't be commented on with gentler words.

Even if it would be more beautifully, if the television would be simply so good that it would not have to give a transmission such as ?Kalkofes Mattscheibe? no more, then it is nevertheless beautifully to be seen that olive Kalkofe with its award-crowned format after some years TV Abstinenz now in used bissiger quality back-registered itself. And for that there is an absolutely deserved one: Worth seeing!

Picture + sound: The picture and sound quality is on a good level for a TV comedy show. The picture is clean, the sharpness is tidy and the colours are powerfully mixed. The Dolby stereo sound transports Kalkofe's biting comments clearly and powerfully on the speakers, whereby it is also not noticeable that the whole thing takes place very centrally and has only little dynamics to offer. Good!

Extras: The DVD box has a lot of additional material to offer. In addition to amusing spots against illegal downloads and animated menus, each episode features an audio commentary by Oliver Kalkofe and Marc Stöcker. These comments are a real enrichment, because they are very informative on the one hand, but on the other hand also extremely amusing and entertaining. It's simply fun to listen to the two men chatting in their relaxed and very interesting way. For Kalkofe fans, it's definitely worth watching the individual episodes again with a commentary.

The third DVD has even more extras to offer. We start with the big review of 2012 (approx. 58 min.), which can optionally also be viewed with an audio commentary. Two best-of episodes (15 + 14 min.) are also on the programme. A Making of (approx. 57 min.) shows how some scenes of the season have been staged. Two recordings of Kalkofes "Gernsehclub" are also very amusing. The Christmas special recorded on Christmas Day (approx. 14 minutes) amuses with a performance by Uncle Hotte and a really delicious gift exchange. And also the common appearance with Achim Mentzel (approx. 15 min.) has to offer some good laughs.

All in all a really good additional offer, which fans can enjoy for a long time. Very good!

Fazit: "Kalkofes Mattscheibe REKALKED" continues the tradition, which Oliver Kalkofe first started on the radio, then from 1994 also on television with his "Mattscheibe", in the usual high quality. Television always comes up with new absurdities and sinks again and again to new levels, so that Kalkofe still has plenty of material for his biting comments and wonderful parodies. The first half of the first season of the latest incarnation of the series offers 17 15-minute shows as well as lots of amusing bonus material that offers fans real added value and an incentive to buy. absolutely recommended!