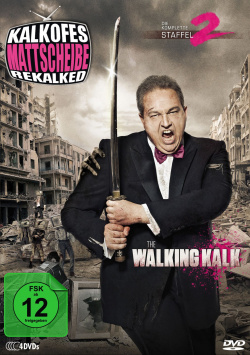 Content: How did Charles Dickens write so beautifully in "The Story of Two Cities": "It was the best time, it was the worst Time." This also applies perfectly to the current television landscape. On the one hand there is first-class serial food like "Breaking Bad", "Game of Thrones", "Luther" or "Downton Abbey". On the other hand, scripted reality formats, astro shows, casting shows and tired show formats with Z celebrities are also celebrating a boom. But fortunately there has been a voice of reason for Trash-TV for twenty years now: "Kalkofes Mattscheibe". Launched as a radio format, Oliver Kalkofe's biting commentaries and wonderful parodies first thrilled audiences at PREMIERE before the programme switched to ProSieben in 2003 after a longer break. Since 2012, "Germany's TV critic Pope God No. 1"With "Kalkofes Mattscheibe REKALKED" we found a new home at Tele5, where the second season of the series has run successfully and has now been released in a great DVD box.

It quickly becomes clear that "The Walking Kalk" has lost none of its malicious bite. When he pulls his legs over unspeakable formats such as "Reality Queens on Safari" or the "Celebrity" version of "Big Brother", when he takes on Boris Becker's media embarrassments or once more parodies stations like "Astro TV", no eye remains dry. As a spectator, you are always torn between crying in the face of the cruelty of the excerpts shown and laughing heartily at Kalkofe's comments and his deservedly malicious parodies. But in the end you are actually a little grateful for all the TV waste - because without this trash there wouldn't be a format like "Kalkofes Mattscheibe".

Permanent commercials, talk shows, reportages, quiz shows or generally personalities who always push themselves into the media foreground - here really nobody is safe from Kalkofes pointed tongue. The fact that his comments themselves are often below the belt and aren't always politically correct may not appeal to some fine minds, but it's absolutely out of the mind of all clearly thinking TV junkies. And so one can only hope that Oliver Kalkofe won't leave us all alone with all the trash formats so soon and that he will be seen as the biting voice of reason for as long as possible. That's why the second "Rekalked" season is again absolutely worth seeing!

Picture + sound: The picture and sound quality is at a good level for a TV comedy programme. The picture is clean, the sharpness is tidy and the colours are powerfully mixed. The Dolby stereo sound transports Kalkofe's biting comments clearly and powerfully on the speakers, whereby it is also not noticeable that the whole thing takes place very centrally and has only little dynamics to offer. Good!

Extras: The DVD box has a lot of additional material to offer. The best bonus for fans are the four episodes of "The Final Kalkdown" (approx. 180 min.), in which the best clips from 20 years of Mattscheibe are shown, as well as "The Incredible Kalk" (approx. 163 min.), the Tele 5 anniversary gala for the Mattscheibe. Here you can see not only the very best clips of the show. Also congratulate numerous surprise guests Oliver Kalkofe and his team on sometimes very amusing way.

Besides there are as usual amusing menus, audio commentaries to all ten episodes of the second season with Kalkofe and chief classifier Oliver Mohme, as well as the big year review 2013 (approx. 90 min.). But that's not all: there's also a detailed Making of (approx. 60 min.), a visit to GROBIT.TV on set including an interview with Oliver Kalkofe (approx. 48 min.), various clips from the food spokesman (e.g. on the election, on the case of Uli Hoeneß, on the end of "Wetten, dass...?" or on Wendler), as well as Easter Eggs. A bulging and really great bonus package, which makes the purchase of this box an absolute must for fans!

Fazit: "Kalkofes Mattscheibe REKALKED" is also in the second season again biting TV satire of the finest. In the twelve episodes of the second REKALKED season it becomes clear again and again that Oliver Kalkofe still gets enough material for his wonderfully vicious parodies and politically incorrect comments even after 20 years on the ground. In addition to the season episodes, the box offers two detailed anniversary specials as well as further extensive bonus material. All in all, this is well over 12 hours of mat screen fabric, which fans should not miss at all. Absolutely recommended!