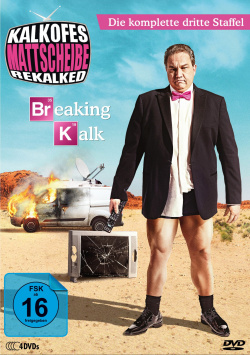 Content: In times in which streaming services and cable broadcasters produce high-quality TV food such as "Breaking Bad", "Game of Thrones", "Luther" or "House of Cards", one is almost tempted to stay in the seventh television heaven. But appearances are deceptive. Because in the depths of public as well as private broadcasting stations the television viewer gets to see also C-Promis in the Big Brother house, in Bembel urinating porn starlets or unspeakable life consultation in the AstroTV. You don't want to believe what you sometimes get in front of them. But fortunately there is a loud, very clear voice of reason: Oliver Kalkofe. He has been using his satire format "Kalkofes Mattscheibe" for well over a decade now to draw attention to the abuses on German television in an entertaining, biting and merciless way.

In view of the high entertainment value of the programme, one would almost like to be grateful to the makers of the parodied and commented formats that they deliver such horrible things. However, if you consider exactly what financial means and sometimes also technical talent are spent here, just to make odds or to rip off viewers, then this isn't really funny anymore, but just sad. But when Oliver Kalkofe and his team dedicate themselves to the various trash formats - and in this season for the first time also to various YouTube clips - no eye remains dry.

No matter whether it's permanent commercials, talk shows, election commercials, documentary soaps, reality formats like "Germany's Next Topmodel" and "Promi Big Brother" (although the term "celebrity" already has something satirical about it), astro shows or personalities who always push themselves into the media foreground - nobody is safe from Kalkofe's pointed tongue here. The fact that his comments themselves are often below the belt and aren't always politically correct may not please some fine minds, but speaks absolutely from the minds of all clear-thinking TV junkies.

One special highlight of the season is undoubtedly the "Too Hot for Prime Time" episode, which really penetrates into the shallows of the levellessness of television. But the remaining 21 episodes also reveal unbelievable things, which makes it all too understandable why more and more viewers are saying goodbye to linear TV and prefer to use streaming services, pay TV and DVD/Blu-rays. And since there is also "Kalkofes Mattscheibe REKALKED" in this format, one thing is quite clear for the DVD box of the third season: absolutely worth seeing!

picture + sound: The picture and sound quality is on a good level for a TV comedy show. The picture is clean, the sharpness is tidy and the colours are powerfully mixed. The Dolby stereo sound transports Kalkofe's biting comments clearly and powerfully on the speakers, whereby it is also not noticeable that the whole thing takes place very centrally and has only little dynamics to offer. Good!

Extras: This DVD box also has a lot of additional material to offer. All episodes are accompanied by amusing and enlightening comments by Oliver Kalkofe, directors Lasse Nolte and Daniel Krauss, post producer Jens Menzel and chief viewer Oliver Mohme. Every comment here is absolutely worth listening to! Beside the comments there is a detailed Making of to the season (approx. 55 min.), a short Making of to the "Eisgurken Challenge" (approx. 5 min.), as well as an extended version of the "Grundsoliden Makler" and an uncut version of "Orinas Telefonfenster". In addition, there is a greeting and interactive menus, five unpublished clips and an excerpt from Oliver Kalkofe's performance in "Der goldene Nazivampir von Absam 2". But that's not all: The box also has all the episodes of Kalkofe's camp report on the jungle camp to offer (audio only), as well as his really good comments on hatred and stupidity, and on the assassination attempt in Paris. In addition to 500 minutes of mat screen, fans are also offered over 150 minutes of bonus material. Very good!

Fazit: "Kalkofes Mattscheibe REKALKED" is also in the third season again biting TV satire of the finest. When Oliver Kalkofe deals out against Trash-TV, it's evil, politically not always correct and at times also very rough - but it always hits the nail on the head. And that's why this satire show still enjoys great popularity even after all these years. The DVD box of the third REKALKED season presents all 22 episodes as well as the big review of 2014 and lots of extras. As a screen fan you simply can't get past this box. absolutely recommended!