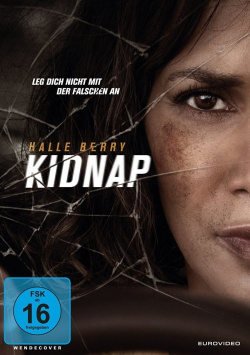 Film: Single parent Karla (Halle Berry) sacrificially takes care of her son Frankie (Sage Correa). If she doesn't work overtime at the diner, where she has to deal with moody customers, she gives her all to give Frankie a nice childhood. This should also include a visit to an amusement park. Unfortunately, however, this turns into a real nightmare when the boy is kidnapped before the eyes of his mother. Karla doesn't torch for long and in her car she follows the hijackers. A wild chase begins, in which Frankie seems to be within reach again and again, yet still out of reach. But even when the gangster's car finally stops, the horror for Karla and her beloved son is far from over…

"Kidnap" was already shot a few years ago, but when the studio went bankrupt, the start date was postponed several times before the thriller was actually allowed to be shown in US cinemas in summer 2017. We release the thriller directly for home cinema. And he's in pretty good hands there, too. Here and there you have the feeling to see a sequel to "The Call - Leg nicht auf!", in which Halle Berry has also fought with a kidnapper. But despite certain parallels, Luis Prieto, the director of the "Pusher"-Remake, has staged a decent tension cinema, which has some very stirring moments to offer, especially in the first third. After a rather quiet beginning, here follows a non-stop chase, which Prieto and his team have implemented in a really gripping way.

Surely, the whole thing seems to be constructed arguably and does not always take it so exactly with the logic. But the tension is maintained over long distances, this does not really have a negative impact. Halle Berry plays the desperate, determined mother convincingly, even if she has to struggle not only with kidnappers, but also with a lot of clichés. All the other actors hardly leave a lasting impression, which is mainly because the movie is a one-woman-show.

"Kidnap" does not reinvent the wheel and leaves hardly any lasting impression. However, the movie can at least provide good and exciting entertainment for 90 minutes, which is why this home theater premiere deserves to be seen!

Picture + sound: Since only one stream was available for the test, no information about the final picture and sound quality can be given here.

Extras: The DVD has no bonus material to offer

Result: "Kidnap" is a solid thriller, that comforts with some good moments of tension and rapid chases over the somewhat bumpy dramaturgy. No masterpiece, but thanks to the very dedicated playing Halle Berry quite worth seeing!