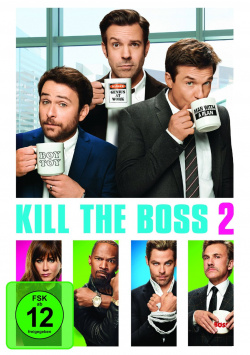 Film: After Nick (Jason Bateman), Dale (Charlie Day) and Kurt (Jason Sudeikis) finally managed to free themselves from their terrible bosses without ending up in prison themselves, the three friends realize that from now on they only want to be their own bosses. The invention of a very special shower device should bring the desired success. With the rich Bert Hanson (Christoph Waltz), they also quickly found an investor who would give them the necessary credit to set up the company. With Hanson's large order in his pocket, nothing stands in the way of a rosy future. Too stupid, though, that the ice-cold Hanson has mercilessly pulled the three somewhat blue-eyed buddies over the table and they could now lose everything they had laboriously built up. But Nick, Dale and Kurt don't give in to each other that easily. They want to kidnap Rex (Chris Pine), Hanson's slippery son, and extort the money from their new adversary to save their company. But unfortunately the three of them have learned nothing from the mistakes of their last adventure and so soon there is again enormous chaos around them. The days as own bosses seem to count - but then the story takes an unexpected turn...

"Kill the Boss 2" hits exactly the same notch as its predecessor. The humor is coarse and sometimes very overexcited. But even though the jokes are shot every second and the level of the gags rarely exceeds the belt line, the movie profits enormously from the actors' noticeable joy of playing, just like the first part. Especially Chris Pine ("Star Trek") and Christoph Waltz are really a lot of fun as a backward father-son team. The small guest appearance of Kevin Spacey is again a big movie and Jennifer Aniston, a sex-hungry dentist with a very special passion for collecting, once again provides some very amusing moments. When renowned actors such as Waltz or Spacey play morally extremely corrupt characters in such a cheerful way, it's great fun even when you as a viewer constantly commute back and forth between hearty laughter and harsh foreign shame.

The comedy also profits from the fact that the chemistry between the three main actors is very good. Although their characters are very different in themselves - or rather, they are very different jerks - they play the comedic balls perfectly and make for some really good jokes. Some of this is lost in the German dubbing, since the script relies not only on slapstick, but also on many puns. But even in the somewhat weaker dub version the interplay of Jason Bateman, Jason Sudeikis and Charlie Day works really well.

What is also quite positive is that this sequel is not just a copy of the first part. Sure, basically the concept is only slightly varied. But there are enough innovations and at the end there is also a nice twist, which makes "Kill the Boss 2" look pleasantly fresh and even a little bit surprising, despite a certain recognition value. The film won't win a prize for originality and claim. Many gags are simply too infantile and the staging at every level too little subtle. But who already liked the first part or generally loves US comedies of the somewhat coarser kind, will have a lot of fun here. And there's a clear one for that at the end: Worth seeing!

Picture + sound: The good colouring and good overall sharpness comfort you beyond the somewhat blurred contrasts in some moments. All in all, the very clean picture leaves a positive impression all around. This is also true for the sound, which shows how good the Dolby Digital 5.1 mix really is in the somewhat more action-packed moments with its decent dynamics. But even in the many scenes in which the dialogues play the main role, there's hardly anything wrong with the sound of the DVD. Good!

Extras: While the Blu-ray has several features and improvised moments to offer in addition to an extended version of the film, the DVD is limited to the cinema version and the short documentary "Lachen garantiert" (approx. 17 min.).), in which the participants express their comedic understanding and show how they used it during the shooting.

Fazit: "Kill the Boss 2" offers only a slight dramaturgical variation of the story of the first part and the humour hasn't necessarily become more demanding either. But the actors' joy of acting, some wonderfully wacky jokes and a quite surprising twist make this comedy absolutely worth seeing, at least for fans of its predecessor. The DVD presents the film in decent picture and sound quality, while the bonus material is rather meager compared to the Blu-ray. Nevertheless there is also a deserved one for the DVD: Recommendable!