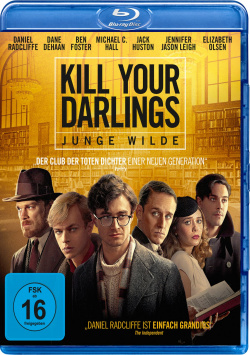 Film: When Allen Ginsberg (Daniel Radcliffe) comes to Columbia University in New York in 1944, the whole world seems to be open to him. But the young man soon realises that he feels like a foreign body in the elite circles of his fellow students and that he wants to break out of the strictly prescribed teaching concepts of his professors. In the unadapted Lucien Carr (Dane DeHaan) Allen finds a kindred soul. Through Lucien he soon belonged to a small circle of unconventional literature lovers who were united in their quest to break with old conventions. Together with Lucien, Jack Kerouac (Jack Huston) and William S. Burroughs (Ben Foster), Allen spends more time in the Greenwich Village underground scene than in his seminars. The experiences he also has there with drugs inspire his literary genius - but his psychologically unstable mother (Jennifer Jason Leigh) and Lucien's possessive lover David (Michael C.) are also very interesting. Hall), Allen's creative intoxication is always slowing him down...

"Kill your Darlings" is the engaging portrait of three friends whose works not only revolutionized the literary scene, but also triggered a whole new youth culture. Allen Ginsberg, William S. Burroughs and Jack Kerouac are considered the founders of the so-called beat generation, which was characterized by a departure from common rules and traditions, as well as provocation and spontaneity. This repeatedly called the guardians of morals to the scene, but found enormous approval among young people in particular. Kerouac's novel "Unterwegs", Ginsberg's poem "Howl" or even "Naked Lunch" by Burroughs became a cult and still enjoy enormous popularity and topicality today. After Kerouac's novel has recently been filmed ("On the Road") and also "Howl" and the controversy surrounding the poem have been filmed, director John Krokidas now dedicates his biopic to the beginnings of the beat generation.

The increasingly destructive friendship between Allen Ginsberg and Lucien Carr is at the centre of the story. The film traces very well how the still quite unneeded Allen is torn out of the conformity of his studies by the fascinating charm of Lucien and how he discovers a whole new world through him, in which he finally finds himself and his art. At the same time, "Kill your Darlings" also reveals the destructive power of fear, envy and jealousy, which leads to a dramatic event that will also shape Allen Ginsberg's later work. By telling this story, Krokidas also gradually traces the genesis of the most important works of the beat generation. And this is exactly what makes this film so appealing, which only superficially looks like a normal college film.

The rather conventional staging makes it possible for viewers who are not familiar with the works of Ginsberg, Kerouac and Burroughs to understand and enjoy the story. At the same time, however, viewers who are interested in this very special epoch of American literary history also get their money's worth. Of course, this is partly due to the coherent script, which is full of allusions to the later works of the three friends. On the other hand, it's also thanks to the very good actors that the movie works out so well. Whether Ben Foster, Dane Dehaan or Michael C. Hall, they all deliver truly convincing performance. But the biggest surprise is Daniel Radcliffe, who is once again far away from his "Harry Potter" image. It is often the case that actors who are identified with a certain role try too desperately to detach themselves from it. But with Daniel Radcliffe, the image change doesn't seem to be an effort. He simply delivers a brilliant acting performance here, which makes the young magician from Hogwarts quickly forget.

"Kill your Darlings" may sometimes seem a bit bulky, the dialogues seem a bit too strained and the visual realization a little too dreary. But overall John Krokidas has succeeded in making a gripping and technically more than solid feature film debut, which captures the zeitgeist of the late 1940 very well and also tells a very stirring story. Absolutely worth seeing for lovers of the more demanding American Arthaus cinema!

Picture + Sound: The very clean picture of the Blu-ray not only convinces with a high image sharpness, which especially in the brighter scenes also shows smaller details to advantage. The atmosphere of the film is also well captured by the warm colours. The sound lives primarily from the dialogues and the music. Large surround effects should not be expected. But after all, smaller surround moments and harmonious ambient noises ensure that a little dynamism comes into the sound backdrop. Good!

Extras: The bonus offer starts with a very lively and interesting audio commentary, which director John Krokidas recorded together with Daniel Radcliffe, Dane Dehaan and co-author Austin Bunn. There are no subtitle options for the commentary, but if you know the English language and are interested in the background of the shooting and the story, you should definitely listen here. We continue with a conversation with Daniel Radcliffe and Dane Dehaan (ca. 6:04 min.), as well as impressions from the Toronto Film Festival (ca. 7:29 min.), where you can see not only pictures from the red carpet, but also insights into the stage presentation of the film. Seven scenes (approx. 7:15 min.), the trailer for the film and further program tips of the provider round off the tidy additional package. Good!

Fazit: "Kill your Darlings" is a must for all lovers of American arthouse cinema. John Krokidas has staged a gripping and technically more than solid feature film debut, which captures the zeitgeist of the late 1940 very well and also tells a very stirring story. The Blu-ray pleases with a good picture and sound quality, as well as some decent extras. Recommended