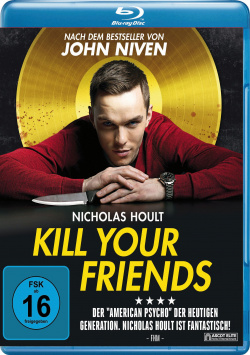 Content: 1997: In the midst of the Britpop scene, music managers are fighting hard for the next big hit. Among them is Steven Stelfox (Nicholas Hoult), who wants to become a new A&R (Artist & Repertoire) manager for his label at all costs. With a few clever moves, he succeeds in sawing off his previous boss. If he buys another big hit now, he owns the job. But unfortunately Steven is gambling away and now his constantly coked up "friend" and colleague Waters (James Corden) is supposed to become the new A&R manager. And Steve must prevent that at all costs. But he is by far not the only one who would literally walk over dead bodies in order to be able to act at the top of the music business. May the games begin…

With "Kill your Friends" director Owen Harris ("Misfits") presents the film adaptation of the cult novel by John Niven, who has used his own experiences as an A&R manager in the work. The book is often compared with "American Psycho" by Bret Easton Ellis and the two film adaptations are also subjected to this comparison. In a way, there are also clear parallels between the two works, but it is towards the end that Niven's work loses some of its speed and bite compared to "American Psycho". But that doesn't mean that "Kill your Friends" isn't an entertaining movie. On the contrary.

The cynical reckoning with the music industry has some great moments. Steven's bitter monologues, with which he repeatedly addresses the audience directly, Moritz Bleibtreu as a completely crazy German music manager, the desperate attempt to build a successful girl band out of a wild bunch of the worst ghetto chicks or the clever manipulation attempts with which Steven wants to be promoted to A&R manager, all console us over some of the somewhat bumpier moments. When it becomes clear that everyone is exploiting, manipulating and deceiving everyone here, then the bitter fight for the next big hit becomes a great pleasure.

Although all this may seem a bit excessive, this look at the dark sides of the music business doesn't really seem unrealistic. The wonderful soundtrack, the good actors (first of all a great Nicholas Hoult) and the great ending make the movie absolutely worth seeing for lovers of works like "Drecksau" or "American Psycho" despite some weaknesses!

Picture + sound: The technical implementation of Blu-Ray is at a very high level. The image sharpness is very good and allows even small details and textures to come to the fore. The colour scheme looks very natural and the balance of black levels and contrasts also support the positive overall impression of the image quality. The same can be said for the sound. Although there is no big firework of effects due to the genre, the surround channels are still used by atmospheric ambient noises and the ingenious 90s soundtrack, which results in an overall very harmonious sound carpet. Very good.

Extras: In addition to the trailer and uncommented B-Roll recordings (approx. 7 min.) there is also a look at the premiere at the Zurich Film Festival with supporting actor Moritz Bleibtreu (approx. 5 min.), as well as ten promo interviews with the actors, the director and the producers (approx. 50 min.).

Fazit: "Kill your Friends" is a bitterly cynical satire on the hard-core music business of the 1990s. Not quite as evil as "American Psycho" once was, but in any case in tone similarly biting as the film version of the controversial bestseller by Bret Easton Ellis. But the movie's greatest strength is Nicholas Hoult, who delivers a wonderfully malicious-charismatic presentation. The Blu-ray presents the film in very good picture and sound quality, as a bonus there are a few interviews and B-Roll recordings. This isn't really stunning, but the movie is so entertaining that the rather disappointing extras don't stand out any more. Altogether applies here quite clearly: Absolutely recommendable!