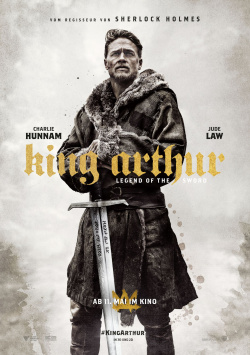 King Arthur - Legend of the Sword

The legend of King Arthus is well known to everyone, as it has been told countless times in books, series, films and on stage. Now Guy Ritchie tries his luck with "King Arthur - Legend of the Sword" at a visually stunning reinterpretation. In his fantasy action adventure, Arthur (Charlie Hunnam) grows up on the hard pavement of London. Raised in a brothel, shady businesses, theft and brawls dominate the agenda. And also at night he does not come to rest, because he is constantly plagued by nightmares. What he does not suspect: they are not dreams, but memories of the death of his true parents. As a young boy, Arthur saw his mother and father Uther (Eric Bana), the King of England, brutally murdered. Now it is said that the true heir to the throne will return to claim the crown from the tyrannical king Vortigern (Jude Law). Of course, he wants to prevent that at all costs. Uther's son must be found and removed as quickly as possible. But there is another magical secret that could be of decisive help to Arthur in his fight for the throne…

"King Arthur - Legend of the Sword" is planned as the start of a franchise comprising a total of six films. Whether there will actually be more movies about the legendary king and his knights of the Round Table is doubtful after this very bumpy debut. Surely, whenever Guy Ritchie is allowed to be himself and use his proven mixture of dry humor, fast cuts and cool soundtrack, the whole thing works really well and has such a high entertainment and show value. But whenever he tries to present a fantasy epic suitable for the masses, the film is far from convincing. At some moments - which should not be spoiled here for dramaturgical reasons - one might even think that trash master Uwe Boll himself stood in for Ritchie.

There are nice ideas, some really well staged action sequences and a handful of amusing sayings. However, the editing seems a bit awkward at many points and makes sure that on a dramaturgical level alone there is simply no coherent overall picture to be found. This becomes especially apparent in the last act, which after the long construction seems to be hurried and somehow unfinished. Ritchie can certainly be credited for trying to add a whole new facet to the well-known myth and for doing without all too popular stylistic devices like the usual hero music in the Hans Zimmer style. If the film had consistently remained true to one line, it could really have become a big board. So it has become quite a nice fantasy adventure - not less, but also not more!

Charlie Hunnam is well cast as the action arthur and Jude Law also cuts a really good figure as the villain. In some scenes, this helps to overcome the impending trash factor of the production. However, the patched up script and the cut, which is a bit too hard for coolness, can't be completely concealed by this. What's left is good enough for an entertaining cinema visit. But whether it is enough to make the whole thing such a great success, which justifies one, let alone five sequels, is rather unlikely. With some exceptions definitely worth seeing!