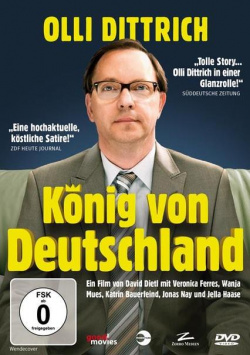 Film: Really special is nothing in the life of Thomas Müller (Olli Dittrich). But somehow he is quite satisfied with the fact that everything is average for him. At least there won't be any unpleasant surprises. Far from it, as Thomas finds out one day when he loses his job due to an e-mail he allegedly sent. With one blow he stands there without any hope and perspective and his whole world view threatens to break apart. But a seemingly accidental encounter with the entrepreneur Stefan Schmidt (Wanja Mues) pulls him back from the abyss. Because the charismatic man offers Thomas a job at his company Industries Unlimited. It is not quite clear to him what he should be doing there. Nevertheless, Thomas gratefully accepts the offer - and he is astonished when his mediocrity suddenly seems to become the measure of all things. Because no matter whether office furniture, clothing, food or politics - his opinion is required for everything. A seemingly completely relaxed dream job. But this impression changes suddenly when Thomas finds out what Stefan and the company are really about...

"King of Germany" is the cinema debut of David Dietl, the son of Helmut Dietl. And even if there are a few minor blemishes, the talented Filius manages very well to step out of the oversized shadow of his father with this first cinema directorial work. Even though there are some very clear parallels to the Jim Carrey hit "The Truman Show" and the movie lacks some satirical bite here and there, the comedy is still extremely entertaining, clever and imaginative. Carried by a wonderful Olli Dittrich, who fits perfectly into the role of the inconspicuous average citizen, the story delivers many wonderful laughs especially in the first half. Some of them are very obviously constructed, others hide in the detail-loving equipment or play rather in the background. So it's really worth taking a closer look at this film.

Total surveillance, manipulation of consumer behaviour and political power games - actually not necessarily the stuff that light comedy entertainment is made of. But Dietl finds a harmonious balance between comedy and dramatic depth, between pure entertainment cinema and intellectual demands. His film is first and foremost fun, but also offers several aspects that are worth thinking about, discussing and philosophizing about. This may now sound as if "King of Germany" is a very challenging head cinema with an extremely complex depth. That's certainly not the case, the staging is just too straightforward and a bit too well-behaved in some decisive moments. What David Dietl proves very nicely, however, is that you can also offer "simple" entertainment to the audience, without completely undertaxing the intellect.

Who doesn't necessarily need jokes at the lower regulars' table level for a successful comedy, for whom humour and a good, meaningful story can't be ruled out and who appreciates German cinema, which doesn't always adhere strictly to the all too familiar scheme F, will definitely have fun with this very pleasant surprise. Despite a certain recognition value a very good movie overall, that shows in a wonderful way, that even on average something very special can happen. For this convincing proof that Olli Dittrich is an extremely talented actor, there can only be one possible evaluation: Absolutely worth seeing!

Picture + sound: There is hardly anything wrong with the technical implementation. The picture of the DVD is clean, has a harmonious color scheme and a good overall sharpness. Minor weaknesses in the detail representation in darker scenes hardly have a negative impact. The sound, available in stereo as well as Dolby Digital 5.1, transports the dialogues out of the speakers in a clear and pleasantly powerful way. There are no big surround moments, but every now and then well-placed ambient noises and smaller sound effects ensure that the surround channels are also used audibly. Good!

Fazit: "King of Germany" is an amusing comedy with a nice story, which shows in an entertaining way, that even on average sometimes something very special can happen. Although there is a certain recognition value here and there, David Dietl's cinema debut moves pleasantly far away from the beaten paths of contemporary German cinema comedy. The DVD is technically well done and also the bonus material is well worth seeing. The bottom line is clear: Recommended!