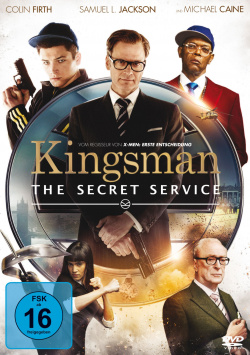 Film: As a child Gary "Eggsy" Price (Taron Egerton) got a medal after the mysterious death of his father, on which a telephone number is engraved. He can only call them once to demand a favor of any kind. However, Eggsy only makes use of this seventeen years later, when the school dropout is arrested by the police after a spectacular car theft. And indeed, shortly after the call he is a free man again, who is picked up by the mysterious Harry Hart (Colin Firth). He turns out to be a tough gentleman spy who makes Eggsy an unexpected offer: Eggsy, who so far has only had bad luck in his life, can take part in an apprenticeship as a spy in the independently operating secret service organisation of the Kingsmen and thus follow in his father's footsteps. But the trials the young man and the other recruits have to face are extremely tough and dangerous, so that Eggsy hardly believes in a future with the Kingsmen. They need a new top agent more than ever before. Because the unscrupulous billionaire Valentine (Samuel L. Jackson) is on the verge of implementing a diabolical plan that could fall victim to a large part of humanity...

After "Kick-Ass" director Matthew Vaughn ("X-Men: First Class") has adapted another graphic novel by Mark Millar for the big screen with "Kingsman: The Secret Service". For the theatrical version of the mini-series comic series, Vaughn chose the best elements of the original and transformed them into a great agent comedy that has its own character and is in many ways superior to the comic. The very drastic sequence in a church alone, which takes place in the comics relatively at the beginning, is much better implemented in the film version. And also the brilliant finale, which is accompanied by the sounds of Edward Elgar's anthem "Pomp and Circumstance", is clearly preferable to that of the comics.

Even those who can't draw these direct comparisons will have great fun with this film - provided there is a weakness for evil humour in the style of "Kick-Ass". Just like there, "Kingsman: The Secret Service" is often not politically correct and is unrestrainedly overly brutal. The fact that the whole thing never drifts into a senseless orgy of violence, but also retains a lot of elegance, is not only due to the first-class staging, but also to the excellently chosen cast. The absolute highlight is Oscar-winning Colin Firth, a gentleman spy who cuts a really good figure in the action sequences. But the wonderfully exaggeratedly acting Samuel L. Jackson is simply wonderful as the villian in charge - once you've got used to his badly put on lisp.

In small but important roles Mark Strong, Michael Caine and Mark "Luke Skywalker" Hamill shine, who also made a memorable guest appearance in the comics. Beside these established actor greats newcomer Taron Egerton can assert himself more than convincingly. The Welsh man transports the transformation from a prolific street hawker to an elegant world saver perfectly onto the screen. In the end, he gets the reward for his convincing work in an amusingly slippery scene where even James Bond is likely to turn pale with envy.

Of course the most famous secret agent in film history was the inspiration for the adventures of Eggsy and his mentor Harry Hart. Especially the equipment often reminds us of the earlier Bond movies and the designs of Ken Adam. And especially a gadget with which the Kingsmen are equipped is a direct reminiscence of the early Bond (fans will immediately recognize what we are talking about here). Nevertheless, "Kingsman: The Secret Service" is neither a Bond parody nor a pure copy of the successful series. Rather, the authors of the comic, but also Matthew Vaughn, have created a homage to the entire genre, which at the same time can assert itself in it in its very own way. The movie manages to do this by making use of many well-known elements, which, however, vary to such an extent that something original and surprising emerges from it. Since body parts are also cut off here and heads explode (although not in such a drastic way as you might expect now), the film is certainly not for the delicately inclined. But if you enjoy elegantly staged agent action that only takes itself so far seriously that it doesn't drift into flat silliness, you shouldn't miss this great fun. And those who already liked "Kick-Ass" will definitely love "Kingsman: The Secret Service". Absolutely worth seeing!

Picture + sound: As was to be expected, the technical implementation of "Kingsman: The Secret Service" is consistently on a good to very good level. The picture is absolutely clean and therefore has an enormous richness of detail. The colour scheme is harmonious and the black values are almost perfectly matched. Whether in the bright or the darker shots, there is really hardly anything recognizable about the image quality. The same applies to the sound, which has a wide range of effects to offer. From smaller sounds discreetly integrated into the action to big, massive sound effects, the viewer gets something thrown around his ears from all channels again and again. Very good!

Extras: In contrast to Blu-ray, the DVD has only very slimmed down bonus material to offer. Apart from a mini featurette about the idea of the film (approx. 10:31 min.) and 3 picture galleries (behind the scenes, film set, props) there are unfortunately no extras. There are more background features for the creation of the film on Blu-ray, which offers almost 90 minutes of bonus material.

Fazit: "Kingsman: The Secret Service" is a great action comedy, which works perfectly both as an homage to agent films such as the classic "James Bond" films, and as a loving parody of this genre. The action is first classly staged and Colin Firth in particular makes a good impression as a powerful gentleman spy. The DVD presents the hit movie in good picture and sound quality. If you are looking for lush bonus material, however, you have to resort to Blu-ray. DVD buyers are fobbed off with a high-quality short documentary about the idea for the film. Nevertheless, just because of the great main movie for all media: Absolutely recommendable!