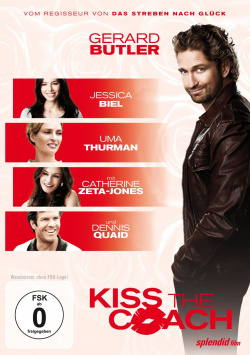 Film: George Dryer (Gerard Butler) used to be a big name in the international football circus. But an unfortunate accident during a game has ended his career prematurely. There is hardly anything left of the fame of old days and George stands before the ruins of his life. His marriage with Stacie (Jessica Biel) has fallen apart and he has no real connection to his son Lewis (Noah Lomax). The former professional athlete has also been trying in vain to find a new job. The offer by wealthy businessman Carl King (Dennis Quaid) to train the football team in which Lewis also plays could be the perfect opportunity for George to at least deepen his relationship with his son and give his messed up life a little meaning again. But what he did not reckon with is that as the trainer of the children, he also becomes extremely interesting for their mothers. And so the attempt to bring order back to his life quickly brings much more chaos with it...

With "Kiss the Coach" director Gabriele Muccino, who previously had success with dramas like "Seven Lives" or "The Striving for Happiness", tries his hand at a casual comedy. In addition to leading actor Gerard Butler, he has been able to engage a whole squad of well-known supporting actors, above all Uma Thurman and Catherine Zeta-Jones as sexually frustrated soccer moms. But even prominent actors don't help much if there is only a weak script available. And this is exactly the problem Muccino's comedy has to deal with. James Tupper's book is simply too unimaginative and too much determined by clichés, that the quite talented director could have conjured something fresh and surprising out of it.

The movie has some very amusing moments. But they are mercilessly lost in the history overburdened by too many storylines. What's problematic is that Muccino takes a lot of time to build up the individual strands of the story, only to let them run more or less into nothing. This applies especially to the character of Carl King played by Dennis Quaid. In the first half of the movie he appears constantly, so that you almost get the feeling that he plays the second leading role. Then it disappears completely, only to reappear at the end for a mini-showdown, which in the end is completely irrelevant.

These are aspects that make the movie seem a bit loveless and cost it a lot of its existing entertainment potential. Sure, "Kiss the Coach" isn't a bad movie, but as a friend of American comedies you can laugh too often. But he is simply too good, too trivial and towards the end simply too sentimental to make a really lasting impression. You're entertained in a nice way here, whereas there is always the feeling that the actors and also the director could have done a lot better. If you're just looking for a harmless mixture of family and romantic comedy and can't get enough of Gerard Butler, "Kiss the Coach" will surely entertain you. But if you need more than just half-baked jokes, stale clichés and a good portion of icing sugar, you shouldn't waste your kisses on this coach. Only conditionally worth seeing!

image + sound: There is hardly anything wrong with the technical implementation of the DVD. The picture is clean, the sharpness is also on a good level with the detail representation and the colouring is very warm and harmonious. As with most other romantic comedies, the sound doesn't offer a big surround firework and is primarily played out in the frontal realm. But since the dialogues are powerfully mixed and well tuned to the film music, a positive overall impression prevails. And there are a few smaller surround effects here and there. Good!

Extras: As a bonus the DVD has seven cut scenes (approx. 10 min.) and five short promo features. While three of them (Gerard Butler & Football, A Second Chance, Father and Son) can't offer much more than short film clips and statements by the actors in just 1 to 2 minutes, the short documentaries on the cast (approx. 7 min.) and the making of the film (approx. 8 min.) at least offer a little bit more information. Not much additional material, but fans can take a look at the edited scenes!

Fazit: "Kiss the Coach" is a harmless romantic comedy, which doesn't hurt anyone, but which deserves more humor and originality just because of the many good actors. Anyone who appreciates Gerard Butler, likes American comedies of a more harmless kind and loves light family entertainment with a romantic touch, will get his money's worth with this DVD despite dramaturgical weaknesses!