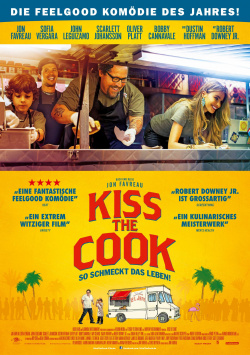 As chef of the "Gauloises" Carl Casper (Jon Favreau) is one of the hottest chefs in Los Angeles. But this success has not only brought Carl luck. His marriage with Inez (Sofia Vergara) has fallen apart, he has hardly any time left for his 11-year-old son Percy (Emjay Anthony) and his boss Riva (Dustin Hoffman) is nipping every attempt at culinary creativity in the bud. No wonder that Carl has little real passion left for his work, which he then has to let the snobbish critic Ramsy Michael (Oliver Pratt) smear on his bread. And so it comes as it should: all the accumulated frustration unleashes itself in a direct confrontation with the critic, who makes Carl a YouTube and Twitter star, but at the same time ends his career in "Gauloises". But Carl uses this low blow for a new beginning. In Miami he buys a run-down food truck in which he wants to explore completely new culinary possibilities. Together with Percy and his sous-chef Martin (John Leguizamo) Carl goes on a particularly tasty road trip, which rekindles his old passion and could also take his look at the really important things in life in a whole new direction...

"Kiss the Cook" seems to be a very personal movie for Jon Favreau. Because the similarities between him and his career as a filmmaker and Carl and his career as a chef must be denied. After working on extremely expensive large-scale productions like the first two "Iron Man" movies and "Cowboys vs Aliens", for which he had to take a lot of criticism, it was Favreau's wish to return to simple, original filmmaking and realize a real passion project. It is also this personal closeness to his main character and the passion that has been invested instead of a big budget that make "Kiss the Cook", despite some small lengths, an absolutely worth seeing feel-good movie.

The characters are well cast, even in small supporting roles. Even if some characters like Carl's former colleague and lover Molly (Scarlett Johansson) or restaurant owner Riva (Dustin Hoffman) remain rather superficial due to the brevity of their appearance and even Robert Downey Jr. doesn't offer more than an admittedly wonderful cameo, it never seems as if these characters were just written into the story to include some prominent friends of the director in the film and to fill the movie poster with attractive names. Rather, all characters radiate a certain charm, which is also noticeable in the staging as a whole.

Favreau doesn't only understand very well how to make his audience warm with this conventional, yet really nice story. With the more than tasty pictures from the kitchen of the "Gauloises" and from the preparation of the Cuban grill sandwiches, he also makes sure that the audience's mouth watering and quite a few spectators with growling stomachs will leave the cinema. Admittedly, dramaturgically the whole thing is applied almost as thickly as the ingredients on the Cubanos. The story doesn't really have any big surprises to offer, which culminates in a somewhat too rushed and smooth happy ending, which should have drowned in dripping kitsch. But also here Favreau has managed to prevent worse with a lot of charm. Even though there would be a lot to criticize, you simply feel so comfortable in the story that you also like to forgive obvious weaknesses and overused clichés.

"Kiss the Cook" is not a big event cinema, but a small, likeable film that only wants one thing: to entertain its audience well and give it some feelings of happiness on its way home. And this culinary comedy does it with flying colours. For this there is then also a more than deserved one: Absolutely worth seeing! But just don't go hungry to the cinema, otherwise some scenes could really become torture!