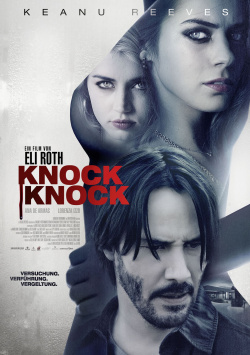 With "Knock Knock" Eli Roth returns after an eight-year break from directing. After "Hostel 2" he shot some short films and also staged an episode of the series "Hemlock Grove" but he paused with feature films for the time being. Now Roth starts with two films in quick succession: the cannibal horror "Green Inferno" and the thriller "Knock Knock". It was rather tame by Roth's standards. Although there is a certain intensity and cruelty in the story itself, this time the filmmaker refrains from a crude bloodshed. In this educational film about the consequences of marital infidelity, the horror is supposed to take place on a psychological level.

This also works quite well in some scenes. Especially when the crackling Ménage-à trois turns into a nightmarish squatting, the entertainment value is clearly catapulted upwards parallel to the horror scenarios in the heads of the male viewers. Here the thriller reveals a potential that unfortunately gets lost again at many points. The reason for this is the far too exaggerated play of the actors. The hysteria that the two crazy sirens display at some point just seems annoying and no longer threatening. While they are still absolutely convincing in the scenes in which they wrap Evan around their fingers, the two actresses deliver rather involuntarily funny performances here. And also Keanu Reeves tries unsuccessfully to give the despair, anger and fear of his character the necessary credibility.

Luckily the end is evil enough to make up for some of the weaknesses. But unfortunately "Knock Knock" reveals that Eli Roth as a filmmaker lacks the necessary sensitivity to form a psychological thriller in all its intensity and subtlety. The movie has some very entertaining moments, some well-done shocking moments, but also some scenes that are just badly played and staged to the point of alien shame. Nevertheless, the positive aspects of the first third and the finale in particular are strong enough to make the strip "worth seeing".