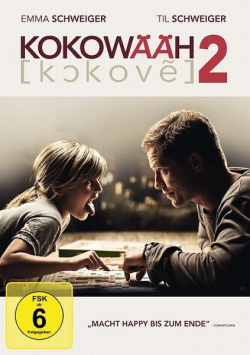 Film: The life of screenwriter Henry (Til Schweiger), his ten-year-old daughter Magdalena (Emma Schweiger), his girlfriend Katharina (Jasmin Gerat) and their baby Louis had just returned to normal when the chaos hit the small patchwork family again. Because not only that the tensions between Henry and Katharina increase so much from day to day that she moves out of her flat together to finally be able to write her new book in peace. Now, of all times, Magdalena's cuckoo father Tristan (Samuel Finzi) has also reported to the couple with a bad news: he has lost all his savings and now has to move in with Henry. It goes without saying that the two men repeatedly clash due to their completely different educational methods. The fact that Magdalena falls in love for the first time in the middle of this family chaos doesn't make things any easier for her fathers...

As already with "Keinohrhase" and "Zweiohrküken" Til Schweiger chose the exact same poster motif for the two parts of "Kokowääh". Only the "2" behind the title reveals that these are different films. This may be dismissed as rather bold unimaginativeness, but it can also be declared as refreshing honesty. Schweiger makes it clear to his viewers right from the start what they are offered here: more of what they saw in Part 1 - and thus exactly what they want to see. Neither stylistically nor dramaturgically, the continuation of the cinema success of 2011 is breaking new ground. The optic is dominated by sepia tones, the soundtrack is often a bit overpowering, the protagonists have to scream at it, and the humorous scenes are not exactly subtle, with the actors playing on overdone facial expressions and gestures, all of which are now trademarks of a typical Til Schweiger comedy. And of course all this can be found at "Kokowääh 2".

Of course these trademarks are things that are easy to criticize. For example, when Schweiger falls back on the so popular "The baby pisses its daddy full when changing diapers" gag and Samuel Finzi comments on it with almost hysterical laughter, then critics are quickly inclined to dismiss it as pure and unimaginative jokes. The same applies to scenes in which Schweiger captures the reactions of the protagonists or involved extras after certain jokes until the last one has understood that it is a matter of laughing here. But on the other hand, Schweiger cannot be denied that he is very good at giving his audience what they want to see.

After all, he seems to hit the mark with an audience of millions. His fans love the stories he tells and the way he stages his films. You can criticize it as much as you like - as long as the audience likes it and they flock to the cinemas, Til Schweiger will hardly care about the negative voices and continue to go the usual and very successful way. The only thing that's really unfortunate is that he's giving away a lot of potential - his own and that of his mostly really good co-stars. Because as a director Til Schweiger has real talent when it comes to beautiful pictures of international format. A little more dramatic depth and a little less faecal humour would add value to his films. And if he would allow his actors to reduce the play with the facial expressions a little and approach the whole thing a little more sensitively, then many of the critics would surely fall silent very quickly (as for example with the really beautiful "No-Ear Bunny").

So it can be said in conclusion about "Kokowääh 2" that it is first and foremost a film for fans. Spectators who don't like Til Schweiger and his films will feel confirmed in all their prejudices. But those who love him will also be entertained by this comedy. A wonderfully over-twisted-self-ironic Matthias Schweighöfer and some well-done moments between Henry and Tristan also console us that the sequel is a bit less charming than its predecessor and even more often makes use of flat jokes than to fully exploit the emotional potential of the story. Therefore there is only one thing clearly addressed to Til Schweiger fans: Worth seeing!

Picture + sound: The very warm colouring, which is typical for Til Schweiger's films in the meantime, is shown to advantage on the DVD. The image is also very clean and the overall sharpness is on a good to very good level. The Dolby Digital 5.1 Mix is also convincing. The fact that the music is sometimes mixed a bit loud is also one of Til Schweiger's favourite stylistic devices and should therefore not be evaluated as negative (at least not in technical terms).

Extras: As a bonus the DVD only has a short outtake of Emma & Til (ca. 1:05 min.), two music videos of The Script (ca. 3:22 min.) and the Disco Ensemble (ca. 3:39 min.), as well as two trailers and an amusing joke video (ca. 6:23 min.). If you want to see more extras, you have to go for Blu-Ray, which also has a Making of, Behind the Scenes featurettes and a team movie on board. Altogether the Blu-ray Disc has to offer about 45 minutes more bonus material than the DVD.

Fazit: With "Kokowääh 2" Til Schweiger will certainly not win any new fans. To most of his many loyal fans, on the other hand, he once again offers exactly what they want to see. That's cute, nice and amusing at times, then again the whole thing goes too much in the direction of Klamauk and makes use of all too stale jokes. Even if the charm of part 1 is not quite reached, those viewers who like the actor/director Til Schweiger and his comedies get their money's worth. Recommended