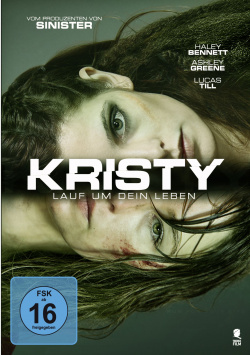 Kristy - Run for your life - DVD

Film: It's Thanksgiving! For most students, this means vacation from university and home over the holidays. Not so for Justine (Haley Bennett), who can't afford the flight to her hometown. And also the invitation of her friend Aaron (Lucas Till) to spend Thanksgiving with his parents is gratefully rejected by the girl. She'd rather stay alone in the dorm. In the beginning she also enjoys doing what she wants on the eerily abandoned campus. But when she goes shopping again in the evening, she gets into a fight with a young woman (Ashley Greene), whom she constantly calls Kristy. The situation threatens to escalate, but Justine barely manages to escape to the dorm, where she feels safe. However, she would now prefer it if there were other students on the premises in addition to her and the security guard. And this bad feeling is not unfounded, because the mysterious woman and her masked companions penetrate the dorm and hunt Justine - the beginning of a true nightmare from which there seems to be no escape...

Six years after the thriller "Donkeypunch" filmmaker Oliver Blackburn presents his latest directorial work in "Kristy - Run for Your Life". The interesting basic idea of the story only becomes clear at the very end, which is why the finale can make an impression. Apart from that, the whole thing is a very conventional thriller that can comfort you over the numerous clichés with some good moments of tension. What the film particularly benefits from is the gloomy atmosphere that the abandoned university campus radiates, over which Justine is chased by her eerie persecutors. It will take some time before this fight for life and death comes to pass. But already in the somewhat long-winded first third, which shows in particular, how the campus empties itself ever more, until Justine is completely alone there and how she spends the time in this initially refreshing loneliness, the ghostly campus provides for an engaging tendency.

Was Blackburn uses all too well-known means, in order to produce tension. From flickering light to suddenly appearing people, the genre box is always being reached deep. And even if you can actually foresee everything somehow, the shock and adrenaline moments still work really well. In the process, main actress Haley Bennett manages to free herself from the typical victim role and to impersonate a quite strong heroine, who wants to prevent by all means from becoming the next victim of the mysterious "Kristy"-killers. Surely, both Justine and some of the other characters are a bit stupid about the rules of the genre at times. But all in all Bennett's game makes Justine a really worth seeing main character.

So "Kristy - Run for Your Life" with its captivating atmosphere, the convincing main actress and the good basic idea has enough positive aspects to comfort you over the smaller dramaturgical weaknesses and logic holes. Although the thriller isn't a groundbreaking masterpiece, it offers exciting and entertaining entertainment. And for that there is a very clear one: Worth seeing!

Picture + sound: The visual realization of the DVD captures the dark atmosphere of the deserted campus very well and supports, as well as the harmonious sound mix, the tension and goose-skin effect of the film well. The image sharpness is at a good level in most moments, only in very dark scenes or with faster camera movements some small weaknesses are recognizable. The sound doesn't offer big surround moments, but transports the dialogues and the smaller, atmospheric sound effects very well coordinated from the loudspeakers. Here the dts mix is preferable to the convincing Dolby Digital 5.1 mix. Good!

Extras: Except for the trailer and other program tips, the DVD unfortunately has no bonus material to offer.

Fazit: "Kristy - Lauf um Dein Leben" is an atmospheric thriller, which doesn't offer any big surprises, but can offer a lot of successful moments of tension and a very atmospheric location. Those who don't mind some dramaturgical hangings will be entertained here really well. The DVD presents the thriller in good picture and sound quality, only the audience has to do without bonus material. All in all this is enough for a more than satisfied: Recommended!