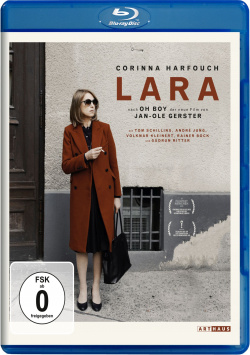 Film: Lara (Corinna Harfouch) could celebrate her sixtieth birthday with joy and pride. After all, her son Viktor (Tom Schilling) gives an important piano concert exactly on this evening. And wasn't it Lara who formed her son for his musical career after the dream of a professional musical career had been shattered for her? Too bad that Lara hasn't been able to reach her son for days and he obviously doesn't want her to come to his concert. But she is not intimidated by this: she buys all remaining tickets for the concert and distributes them to everyone she meets that day. But the more Lara struggles for a successful evening, the more the events get out of control.

For a long time Jan-Ole Gerster took his time for the follow-up to his surprise success "Oh Boy". Seven years have passed since his celebrated debut. "Lara" shows some parallels to its predecessor. Here and there the viewer follows the main character through Berlin for one day. And in both films there is a subtly interwoven humour, which is much more evident in "Oh Boy" than it is here. An even clearer difference between the two works is the visual realization. The reduced black-and-white pictures of "Oh Boy" are contrasted here with very powerful shots that give the scenes in Berlin a very unique atmosphere.

The character drawing is really interesting in this film. In "Oh Boy" it wasn't difficult to develop sympathy for Tom Schilling's character, but it's a little different with the title character, who is magnificently portrayed by Corinna Harfouch. Lara is really not a very sympathetic woman. She radiates an almost imperious arrogance, which is only broken by short moments of a recognizable vulnerability. But the longer the audience follows Lara through her day, the more accessible this person becomes. And at the latest when she visits her mother, something like understanding - and even a little bit of pity - comes up with her.

The fact that Harfouch does not overstate this character, but reduces her performance to small nuances, makes Lara's complex character somehow very authentic - even if the character itself may seem rather clichéd at its core. Supported by excellent supporting actors, which include Rainer Bock (meanwhile internationally seen, e.g. in the great series "Better call Saul") as well as "Oh Boy" actor Tom Schilling, Corinna Harfouch carries this small, unagitated but nevertheless very stirring drama, which absolutely deserves a "worth seeing".

Picture + sound: The picture quality leaves a very positive impression with very authentic colours and a high overall sharpness. This is further underlined by the successful mixing of contrasts and a good detail representation, especially in the outdoor shots. The DTS-HD 5.1 mix is rather unspectacular, but captures the mood of the story well and reproduces the dialogues powerfully. All in all, there is a well-deserved "Good!" for these technical aspects: Good!

Extras: As a bonus, the Blu-ray has, besides a very short Making of (approx. 3:54 min.), four mini-featurettes about the director, the main actress, the story and about the classical music in the movie. But since these promo clips each have a running time of less than one minute, one shouldn't expect too much in-depth information here.

Fazit: "Lara" is an unagitated drama, pervaded by quiet humour and a discreet sentimentality. Even if the film doesn't quite reach the quality of Jan-Ole Gerster's celebrated debut "Oh Boy", the work can score with an extremely strong Corinna Harfouch, a very engaging visual language and wonderful dialogues. The Blu-ray pleases with an atmospheric realization on an audiovisual level. The bonus material on the other hand remains very superficial. All in all, however, there is one very clear recommendation: Recommendable!