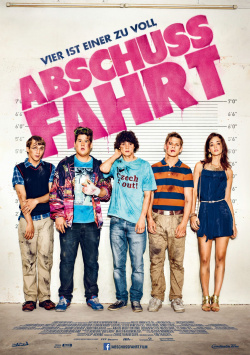 Paul (Tilman Pörzgen), Berny (Chris Tall) and Max (Max von der Groeben) are not the coolest at their school. So it's no wonder it doesn't really work out with the girls. This is supposed to change on the class trip to Prague. Here the buddies finally want to make it really crack. After boring city tours and almost endless hours in the more than run-down hotel everything is prepared for a wild party night. But then the bad news: Paul has had his beloved Juli (Lisa Volz) wrapped around his finger to take care of her autistic brother Magnus (Florian Kroop), while she is having fun with another guy in a club. But the three friends do not want to be dissuaded from their plans. With Magnus in tow, they jet through Prague's nightlife in an old stretch limo. Of course it doesn't take long for the buddies to put their foot in their first mouth - and soon the entire Prague underworld seems to be after them...

With "Abschussfahrt" Tim Trachte delivers his cinema debut as director and screenwriter after the award-winning TV thriller "Davon willst du nichts wissen" ("You don't want to know anything about this"). He tries his hand at a teen comedy that makes use of the American colleagues from "American Pie" and "Euro Trip" or the British "Inbetweeners" and spices the whole thing up with a pinch of "Hangover". The not exactly subtly served gags revolve primarily around sex, alcohol and various body fluids, whereby every cliché, no matter how worn out, is celebrated extensively. But if you know exactly what you're getting into and don't want to see anything else than a raunchy comedy for viewers between 12 and 18 years of age, you'll be well entertained in many moments. The main actors are very sympathetic, whereas the young comedian Chris Tall makes for some really good laughs. In the course of the wild party night there are always some quite original ideas that work as a good counterbalance to the many worn out clichés. The reaction of a classmate to the teacher's announcement that there is no Internet and mobile phone reception in the hotel, for example, or the dubious limousine driver who can simply get everything, are really funny ideas that should be well received by the target audience.

Sicherlich, "Launching" is a very simply knitted comedy with a lot of partly unnecessary poems and few surprises. But neither the actors nor the craftsmanship have to hide from the international role models. It is a pity, however, that the effort to generate as many laughs as possible cannot develop the charm that has made some of the better known works of this genre so successful. Although this class trip offers quite good entertainment for the target group, it does not stand out from the crowd of similarly structured teen comedies. Therefore: a good mixture of good jokes and foreign shame notes, which could at least please the target audience. And since this is the main thing, there is still a satisfied one despite several weaknesses: Worth seeing!