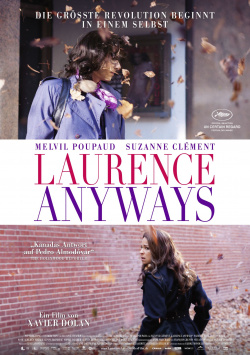 Actually, Laurence (Melvil Poupaud) and his girlfriend Fred (Suzanne Clément) have an almost perfect relationship. They love each other very much and enjoy their rather unadjusted lifestyle. But the day comes when Laurence has to admit that he is living a lie. He feels trapped in the wrong body and wants to live as a woman from now on. His feelings for Fred have not changed, he wants them to continue in his life. And Fred still loves her Laurence, too, but she doesn't know if this love will be strong enough to survive this drastic change. More and more the everyday life of the two is now dominated by prejudices, hostility and quarrels. The abyss between Laurence and Fred is getting bigger and bigger, but the bond between them simply won't break….

With his third feature film "Laurence Anyways" the French-Canadian filmmaker Xavier Dolan consolidates his reputation as one of the most interesting representatives of young independent cinema. After "I killed my mother" and  "Heartbreaker", this is Dolan's most mature film to date as a storyteller. As a director, he has taken over a bit here and there, loses himself a little too much in his visual language, which is at the expense of the speed and ultimately the intensity of the staging. The story, which could have been told well and gladly in 2 hours without any significant loss of quality, loses its strength towards the end. For while the viewer has long since understood what Dolan's point is, the young filmmaker repeatedly feels the urge to underpin this with pretty, dramaturgically but rather unnecessary scenes.

This is a pity inasmuch as the decade-long story - the 1990s - is told with great sensitivity and a pleasant mixture of drama, humour and a pinch of completely cliché-free romanticism. With a very engaging, artistic visual language and accompanied by a well-chosen soundtrack, Dolan builds his characters and their relationship to each other, exposing them to very drastic and difficult changes. Not only Laurence is on a search for himself, for his identity and for his very personal happiness. Even Fred, who actually felt incredibly comfortable in her small world with Laurence, is forced by his drastically changed lifestyle to question whether she has actually found her place in life, her way to happiness.

Melvil Poupaud and Suzanne Clément deliver really great performances. There is a very special chemistry between them, which makes it credible that there is a love between Laurence and Fred, which ultimately leads to the two not being able to work together, but also not without each other. It is a love whose intensity leads to extreme happiness, but also to deep pain, which Laurence and Fred have to live through over the years. This is stirring, stirring, amusing and sad and somehow seems very lifelike despite its sometimes very artificial staging.

With a more sophisticated timing and a tighter narrative structure  "Laurence Anyways" could have been a great arthouse pearl. So it is still enough to make an absolutely worth seeing drama for lovers of international arthouse cinema, with a strong story, carried by two strong main actors. Despite its overlength and minor dramaturgical weaknesses, a consistently positive overall impression remains at the end. A bit exhausting, but still: worth seeing!