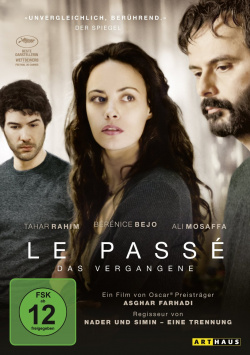 Film: After four years in Iran, Ahmad (Ali Mosaffa) returns to Paris to bring about the divorce from his still-wife Marie (Bérénice Bejo). Although they actually split up in a good way, Marie has so far concealed that she now lives with a new husband, Samir (Tahar Ramin) and his son. Ahmad soon feels that his older stepdaughter Lucie (Pauline Burlet) suffers a lot from the fact that another new man is living at her mother's side. The fact that Samir's wife is in a coma after a suicide attempt while he builds up a new family happiness with Marie seems to play a decisive role in the girl's rejection. But the more time Ahmad spends with Marie's new patchwork family, the more he uncovers the real sad truth...

With "Le Passé - Das Vergangene" the Iranian filmmaker Asghar Farhadi has staged a more than worthy successor to his Oscar winner "Nader und Simin - Eine Trennung". The film may not be as controversial and significant as its predecessor due to the fact that it is not set in Iran, but in France. But the story, built in a depressing slowness, is even more touching and emotional in the end than the award-winning divorce between Nader and Simin. Farhadi perfectly understands how to open the curtain very leisurely, so that the viewer can look deeper and deeper under the surface, until at the end the whole tragedy of the plot is revealed. Like Ahmad, you also have suspicions and fears as a viewer, but the real truth hits you a bit surprisingly.

Why this works so well on an emotional level, is the fact that Farhadi tells a rather universal story in her intimacy this time, which could theoretically affect everyone completely detached from cultural differences. It's a deeply sad story, told without any form of exaggerated kitsch or forced happy end - and that's why it's so true-to-life and gripping. The great actors, above all Ali Mosaffa and Bérénice Bejo, intensify this impression and turn the film into a great emotional acting cinema.

Sicherlich, in order to simply switch off and relax and enjoy the evening, "Le Passé - Das Vergangene" is not necessarily the right film. But those who appreciate sophisticated Arthaus-Kost with great actors, a captivating camera work and an oppressively moving story simply cannot get past this film. Absolutely worth seeing!

image + sound: The DVD presents the drama in good image and sound quality. The visual implementation convinces with a good overall sharpness and an authentic colouring. Minor weaknesses in the detail display in dark scenes hardly have a negative impact. The sound is, according to the film, rather reserved, but transports the dialogues out of the loudspeakers in a way that is easy to understand and provides an atmospheric carpet of sound through harmoniously mixed ambient noises. Good!

Fazit: "Le Passé - Das Vergangene" is a moving drama, which despite - or maybe because of - its slowness is extremely gripping and therefore even more emotional and impressive than Asghar Farhadi's Oscar winner "Nader und Simin - Eine Trennung". Great actors, a captivating camera work and a captivating story turn the Kammerspiel into a big piece of Arthaus cinema, which presents itself on the DVD in good picture and sound quality and also offers worth seeing bonus material. For lovers of more demanding dramas an absolute must!