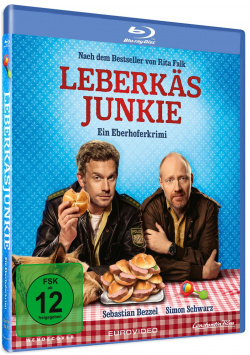 Film: The Eberhofer Franz (Sebastian Bezzel) is papa. But there can be no talk of family harmony with him. His girlfriend Susi (Lisa Maria Potthoff) has given him his marching orders and the Eberhofer is only allowed to see his son sporadically. So now he is a bachelor again and spends his free time drinking beer and eating meat loaf. And at some point his body can no longer cope - the Eberhofer is put on a diet. And as if that weren't bad enough, he also gets to deal with a case of arson, which puts Niederkaltenkirchen's biggest football hope, of all places, in prison. Together with his buddy, the private detective Rudi (Simon Schwartz), Eberhofer gets to the bottom of the matter while his body fights against liver-cheese withdrawal symptoms…

"Leberkäsjunkie" is the sixth film adaptation of the popular Eberhofer thrillers by Rita Falk. The film adaptations are a real phenomenon, as each part attracts more viewers to the cinemas than the previous one. Part 5, which was shown for the first time outside Bavaria at the time of its theatrical release, even managed to break through the magic million mark. And this sixth film even attracted almost 1.25 million viewers to the cinemas. No wonder, because regular director Ed Herzog once again mixes the tried and tested ingredients into a wonderfully quirky whole, which lives above all from the wonderful interplay of the perfectly cast characters.

Specially Sebastian Bezzel proves once again to be the ideal cast for the non-conformist policeman Franz Eberhofer, who regularly brings his fellow men to the brink of despair ("Zefix, Eberhofer"!). It is precisely the interplay with Simon Schwarz that provides the unmistakable tone of the series, which despite their very Bavarian character makes the films so popular even beyond the Weißwurst equator. Weird, evil and always very charming - that's how fans know and love their Eberhofer films. And there, part 6 delivers exactly what the audience expects...

Again, the actual crime plot is only a minor matter. Which is not to say that it wouldn't be very entertaining. But in the end, it's all about Franz and Susi, about Rudi, about Papa and his fondness for hemp products (which this time, however, is replaced by a new passion), about grandma and the other inhabitants of Niederkaltenkirchen. Those who already liked the first parts for exactly these reasons will be entertained in the best way again. Sure, not every gag hits the mark, but in most cases the dialogues are extremely funny and wonderfully politically incorrect. It's easy to become an Eberhoferjunkie: Absolutely worth seeing! esp;

Picture + Sound: Also in the technical area you can rely on the troupe from Niederkaltenkirchen again. The image is clean and has a decent overall sharpness. Contours are clearly drawn and even small details are shown to their best advantage. The color scheme seems a little bit overdone, but this fits into the visual style of the comedy. The sound is available as a DTS-HD Master Audio 5.1 mix, which is quite discreet over long distances, but sounds pleasantly powerful, especially when it comes to musical interludes. Good!

Extras: The focus of the bonus material on the Blu-ray is an entertaining and informative Making of, (approx. 27:22 min.), which shows, for example, why a new Eberhofer farm had to be found for the film and how this was then transformed into the "old" farm. In addition to the trailers, there are also a few amusing short clips such as Susi's wanted advertisement for a babysitter (approx. 1:43 min.), Rudi's esoteric wisdoms (approx. 5:44 min.), food talk with Sebastian Bezzl and Eva Mattes (approx. 2:51 min.), the cry for help of the lonely wolf (approx. 0:46 min.), as well as Granny's Wisdom (ca. 1:27 min.).

Fazit: "Leberkäsjunkie" is the most successful Eberhofer film adaption so far with about 1.25 million viewers. No wonder, as this sixth part can once again come up with a lot of wacky humor and wonderfully quirky characters. The Blu-ray presents the film in good picture and sound quality and also has a good making of in the bonus package. Absolutely recommendable!