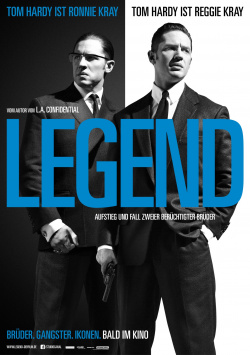 Reggie Kray (Tom Hardy) has built up a small empire in London's East End with the perfect mixture of tactics, impertinence, charm and criminal energy, which he leads together with his recently released twin brother Ron (also Tom Hardy). Behind the façade of their nightclubs they forge important alliances, extort protection money and make it clear to their opponents who is in charge of the underworld of London. When Reggie also meets the love of his life in Francis (Emily Browning), the world seems to finally belong to him. But then he goes to jail for six months. Enough time for the hotheaded Ron to drive the Krays' businesses to the brink of ruin. Francis also feels increasingly uncomfortable in the shady society that represents her new life. After his release from prison, Reggie has to realize that the reins he had held so tightly before are threatening to slip away more and more. And he wants to prevent that at all costs…

About the Kray twins there are already some movies and books. And everyone who lived in London in the 1950s and 60s has at least one story to tell about them. It has long since become unclear what truth and what legend are. Director Brian Helgeland also knows this and makes it clear that with "Legend" he tells his version of the story, which doesn't necessarily have to correspond to the complete truth. Through intensive research and conversations with people from the Krays' sphere of influence, however, he wanted to create a picture of the brothers that came as close as possible to the truth. And in order to stand out even more clearly from other works about the Krays, he has the events told from Francis' point of view, which in the end proves to be a very clever move.

"Legend" has become a good, sometimes even very good gangster film, which has to struggle with some lengths. However, these are compensated by very strong tension moments and stirringly drawn characters. Nevertheless, the whole thing is basically a very conventional genre contribution that does not succeed in setting its own impulses. So you could easily put him in the category of "everything you've ever seen" if it weren't for lead actor Tom Hardy. What Hardy delivers here in the double role of Reggie and Ron is simply spectacular. He creates two completely different characters who seem to have nothing in common except for a certain outward similarity. When the charming, eloquent and prudent Reggie and the simple-minded, psychologically unstable and hot-headed Ron share the screen, one forgets in a few seconds that they are both one and the same actor. Hardy delivers a really incredibly good performance. That's sometimes very humorous, sometimes extremely brutal - but always really intense.

Hardy's impressive double play of course lays a big shadow over the other actors, who all act very convincingly, but don't manage to deliver something similarly lasting. Nevertheless, the entire ensemble makes sure that "Legend" has become a first-class acting cinema. Due to the stirring play the movie is also a pleasure in its more tenacious moments, even though it only has conventional fare to offer in its dramaturgy. So, if you want to see a classic gangster drama with great actors, a good soundtrack (among others by singer Duffy, who also makes a small guest appearance), some suspense and a pinch of cleverly implemented humor and can do without some big innovations, you shouldn't miss this movie just because of Tom Hardy - and if possible also watch it in the English OV, in which Hardy's multi-faceted game becomes even more apparent. Absolutely worth seeing!