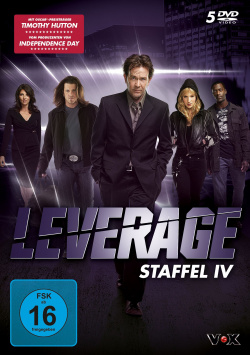 Content: The team of "Leverage Consulting & Associates" is back: Leader Nathan Ford (Timothy Hutton) still does everything in his power, together with the ingenious hacker Alec (Aldis Hodge), the weapons expert Eliot (Christian Kane), the clever thief and facade climber Parker (Beth Riesgraf), as well as the actress and trickster Sophie (Gina Bellman), to put a good line through the bill for the rich and powerful, who believe that the law does not apply to them. Also in the penultimate season of "Leverage" Nathan and his team reach deep into the box of tricks to fight for justice for their clients.

No mountain is too high for this, as the troops proved in the first episode of the season. In Alaska, Nathan wants the notebook of the crashed Alan Scott (Eric Stolz) Bergen, which before his death Scott had found out something about a comprehensive mortgage fraud, which he documented in this book exactly. But also the company, which could get into big trouble by these revelations, is after the notebook - and so soon a very dangerous competition begins in icy height, for which first of all some fears must be defeated...

But this is certainly not the only difficult case in this once again very successful and entertaining season. An attractive marriage swindler (Emma Caufield), a deadly botch in building construction, the hunt for a Van Gogh painting or organ smuggling keep the "Leverage" team on their toes. And then Nathan gets suspected of murder. As if that wasn't bad enough already, the team also wants to put a stop to the mighty Wall Street king Jack Latimer (Leon Rippy), who gets an old adversary of Nathan to help him get rid of the annoying justice fanatics. But also the "Leverage"-Team can count on some good old acquaintances...

A case told from three different perspectives or an episode staged in the style of the comedy series "The Office", the US version of "Stromberg", and a host of guest stars such as Will Wheaton, Tom Skerritt, Danny Glover or Richard Chamberlain make the 18 new episodes of the fourth season once again a treat for all fans of well-kept US thrillers. The mixture of cases inspired by true events, crook comedy in the style of the "Ocean's" movies, action, a little drama and kitsch-free romance (the relationship between Alec and Parker provides for some wonderful moments) works out great again in the fourth round. The good actors and the fast, but never overloaded staging are just fun. If you liked the first three seasons of "Leverage", you can't get past this fourth - and unfortunately penultimate - box. Worth seeing!

Picture + sound: The technical implementation of the series is again at a good TV level in the third season. The image is very clean, the sharpness is absolutely satisfactory, especially in the brighter outdoor shots, and the colors are mixed pleasantly strong. This is more than sufficient for a TV series.

The sound is dominated by the dialogues and the music in particular, but now and then the surround channels are also used thanks to some sound effects such as gunfire or explosions, which provide pleasant dynamics especially with the Dolby Digital 5.1 track. Good.

Extras: Each DVD of the 5-disc set contains some bonus material. On DVD 1 there is a short look behind the scenes of the first episode (ca. 2 min.), while the second disc features some unreleased scenes (ca. 7 min.). DVD 3 offers a look at the normal madness in the authors' office (approx. 3:30 min.) and the fourth disc offers a parody of the episode "Under observation" (approx. 6 min.). Like the episode itself, this fake look behind the scenes also presents itself in the style of the comedy series "The Office" - whereby the stars of the series are the better actors than the makers, who try to show their funny side here. But the whole thing is still amusing, which is also true for the funny outtakes (about 6 minutes), which are included on the fifth DVD. Good.

Fazit: "Leverage" presents itself also in its penultimate season in usual entertaining form. Tension, humor, action, interesting cases and good actors make this series entertaining entertainment that fans just can't get enough of. Even though the concept of the series was never fundamentally changed, it's really a pity that after the 5th season it's finally over. But until then, fans should enjoy these 18 episodes of the 4th season. And it's really not difficult! Recommended