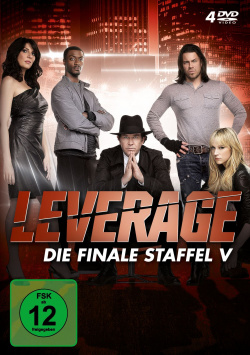 Content: New headquarters, same mission. Even after moving to Portland, the Leverage Consulting & Associates team continues to fight against all forms of injustice. Nathan Ford (Timothy Hutton), the ingenious hacker Alec (Aldis Hodge), the weapons expert Eliot (Christian Kane), the clever thief and facade climber Parker (Beth Riesgraf), as well as the actress and trickster Sophie (Gina Bellman) do their best to continue to salt the soup of the rich and powerful who believe to be above the law. Whether they have to prevent the dangerous injuries of a professional ice hockey player from being staged by their own club out of greed for profit, cheerleaders have to provide legally regulated security measures or an old case of airplane hijacking from the 70s have to clear up, the skills of individual team members are more required than before. Only Eliot suspects that Nathan is concocting a much bigger coup, which is directly connected to the death of his son...

After a pleasantly self-ironic beginning, in which Portland, since season 2 shooting location of the series, finally receives the appreciation that this city deserves, "Leverage" shows in fifteen new episodes for the last time, where the strengths of this entertaining crime series lie. Charming characters, exciting stories, some of which are literally taken from life, as well as neatly staged action sequences make up the high fun factor of the series. Some worth seeing guest stars, a dash of self-irony, a pinch of romance and some drama also make sure that it never gets really boring.

Although the finale is absolutely successful, in the end the feeling remains that the fifth season isn't one of the best of the series and that the makers didn't fully exploit the potential that lay in the final storyline. That doesn't make the last episodes a bad or weak season. Nathan and his team might have been wished for a more spectacular exit, which would not only be a relay final, but also a final for the whole series. But fortunately, there are enough good moments to comfort us about this weakness. When Parker, for example, has to try her hand at cheerleading, while the rest of the team is desperately trying to get politicians enthusiastic about a controversial law, when the series travels back in time to the 70s, or when the unscrupulous manager of an ice hockey team is literally led on the rocks, then it becomes very clear again why "Leverage" has become so dear to his fans over the course of five seasons.

And even though the concept here now shows some minor signs of wear and tear, the way in which very serious topics, which can only make you angry because of their injustice, are often told in such an entertaining and amusing way without being ridiculed, works very well again in the last attempt. So anyone who already liked the first four seasons or simply loves classic crime series with a slight touch of the popular "Ocean's" films should not leave this last box in the store. And that's why, at the end of the day, the following applies once again: Absolutely worth seeing!

Picture + sound: The technical implementation of the series can convince even in the last season in the usual quality. The picture is very clean and the overall sharpness is at a good level. The powerful colours are particularly positive, however. That's more than enough for a TV series. The sound is in a pleasantly lively Dolby Digital 5.1 mix, which transports the soundtrack and the dialogues powerfully and well coordinated from the speakers. Every now and then there is also a certain surround feeling thanks to sound effects such as explosions or gunfire. Good!

Extras: The final box has about 13 minutes of bonus material to offer. This consists mainly of additional scenes to two episodes on Disc 1 and three episodes on Disc 3. The fourth DVD has some nice outtakes to offer. There is no bonus material on the second DVD, even if it is announced on the label of the DVD itself. As a fan you would have wished for a bit more to say goodbye to the series.

Fazit: The final season of "Leverage" shows once again where the strengths of this entertaining crime series lay. Exciting cases, a lot of humour, a little drama and action make the adventures of the team of "Leverage Consulting & Associates" a great pleasure. Even though the last fifteen episodes aren't the best of the series and the concept shows slight signs of wear in some episodes, the dignified ending reconciles absolutely for the smaller weaknesses of this final season. The DVDs are technically well done as usual, only the bonus material is a bit poor this time. Nevertheless, especially for fans of the series, this is the last time that the following applies: Recommended!