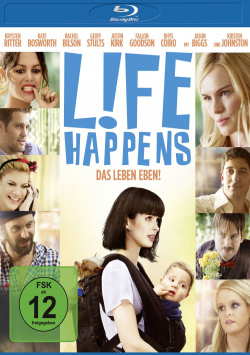 Film: Kim (Krysten Ritter) and her two friends Deena (Kim Bosworth) and Laura (Rachel Bilson) live a completely carefree life in a three-person flat. Especially with Deena she celebrates one party after the other and is not averse to meaningless one-night stands. Too bad that one of these adventures doesn't remain without consequences and that Kim unexpectedly finds herself confronted with the role of the responsible mother. And that's harder than she thought in her initial naiveté. Her job as assistant to the extremely moody Francesca (Kristen Johnston) is on the brink because she once had to take her baby to work. She can't party anymore either, because she can't afford a babysitter. And her sex life is completely asleep. For Deena there is only one way out of this misery: a wild party night! And actually, that seems to help: Kim finally has some fun again and gets to know Nicholas (Geoff Stults), a really cute guy - whom she of course doesn't tell that she has a baby. It's just stupid that Kim's starting to take a serious interest in Nicholas. But you can't build a relationship on a lie...

"L!fe Happens" Krysten Ritter and her co-writer and director Kat Coiro have virtually written themselves up. At least at the beginning, her role strongly reminds of the exact type for whom Ritter seems to be cast: the somewhat crazy party slut. Kind of weird, but still adorable. So you know her from "Apartment 23", the "Gilmore Girls" or from the vampire comedy "Vamps". Here she has to let this character become a responsible mother in the course of the story, which she manages with a lot of charm. With humor, which only seldom comes across as over-twisted, and a good cast of actors, such a nice comedy has been created, which however has to struggle with a big problem.

And these are the two main characters. Kim and Deena seem so selfish and superficial, especially at the beginning, that it's hard to bring them real sympathy. While Kim's situation changes relatively quickly, Deena takes much longer to become a sympathetic character - actually too long to win over the audience. The much more charmingly drawn side characters, from a cute naive laurel to the wonderfully greasy, yet very lovable Henri (Justin Kirk, who was also allowed to play alongside Ritter in "Vamps"), manage to make sure that the audience isn't too annoyed by Kim and Deena's self-absorbed partying to switch off. And that's good, because the movie doesn't become really funny and charming until the second half.

Who doesn't expect more than nice US comedy entertainment, in which it's about women's friendships, responsibility, self-discovery and love, can be recommended for this movie because of its likeable cast and some very nice moments despite its rather bumpy beginning. Worth seeing!

Picture + sound: While the sound, as usual for a comedy of this kind, is not very spectacular and is mainly determined by dialogues and music, the visual implementation can score with a high overall sharpness, a pleasantly warm colouring and well balanced contrasts. Good!

Fazit: "L!fe Happens" is a nice comedy about friendship, love and responsibility, which can score with a charismatic cast and some very amusing snapshots. However, the movie suffers a bit from the fact that its main characters are too selfish and not really sympathetic at the beginning. Only in the course of the story and with the help of the much more charming supporting characters the two main characters slowly but surely grow to the viewer's heart. Not a big success, but if you are looking for nice US comedy entertainment or a women's film of a different kind, you can take a look here.